The following is the first installment of a multi-part series examining the preparations and aftermaths of the 2014 World Cup and 2016 Olympics in Brazil.

“There are visible and invisible dictators. The power structure of world football is monarchical. It’s the most secret kingdom in the world.”

So said the great Uruguayan writer Eduardo Galeano. Thanks to sports journalist Dave Zirin, the quote has been getting quite a bit of attention recently. But the power structure of world football is not the only malevolent shadow lurking in the dark today. There have been a great series of injustices secretly unfolding in Brazil ever since the South American giant won its bid for the World Cup back in 2007. 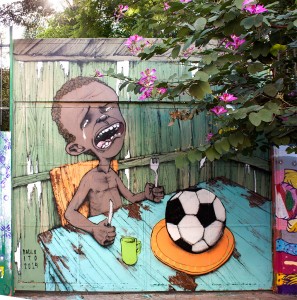 Brazilian artist Paulo Ito created this mural on the doors of a schoolhouse in São Paulo. The image has since gone viral. Photo courtesy of Paulo Ito.

On June 12th, the world will shift its attention and collective body clock south, with the idea that the 2014 World Cup is solely about soccer and national rivalries as the planet’s 32 top teams vie for soccer’s most coveted prize in 12 cities throughout Brazil. While an intriguing storyline for FIFA and its corporate sponsors, the storyline is a misleading half-truth at best.

At one point in time, I wanted to be in Brazil during the upcoming World Cup. To attend the pinnacle event of the world’s most popular sport, in the spiritual home of the sport itself, the idea was alluring – all the more so being that I had fallen in love with that wonderful country and its people after living there for a period of time during 2013.

I envisioned Brazilian flags hanging from balconies, groups of fans chanting in unison, and eruptions of shouts from outdoor cafes in Rio following a goal by Neymar. The sun would be shining, live samba would be flowing from open-air bars, and maybe – just maybe – there would be a raucous celebration throughout the streets of Brazil upon the Brazilian national team winning it all.

Unfortunately, this was an ill-fated vision. One that fell hard and swiftly upon learning what this World Cup is really about.

When I think about the upcoming World Cup now, a very different set of images come to mind.

I see 14 billion Brazilian taxpayer dollars squandered while FIFA escapes with 4 billion dollars in revenue tax-free; I see the use of those billions of taxpayer dollars to build or renovate stadiums that will sit idle or offensively underused after the World Cup, rather than building badly needed schools and hospitals in a country that is still very much developing and still very much grappling with widespread poverty, inequality, and violence; I see the forced evictions of thousands of marginalized, low-income favela residents to make room for sport venues and infrastructure projects; I see a corrupt government out to gain for itself and please foreign interests rather than take concern for the welfare of its own people and wondrous natural environment; I see the hijacking of a country by a select elite few, including FIFA, corrupt politicians, and foreign corporations; I see police brutality and a thinly layered mascara attempting to cover up deep-seated and festering social dynamics within society.

And through it all I see the continued endorsement of the event by major U.S. corporations, as well as hordes of foreign tourists who will flock to the shores and cities of Brazil by the hundreds of thousands, pleasantly ignorant to the true realities of this mega sporting event, the true costs of hosting it in this still-developing nation, the true impact that it has wreaked and will continue to wreak on the lives of many ordinary Brazilians.

It’s time to re-think the World Cup. The façade of sport needs to come down. It can come down as swiftly and forcefully as it did for my glorious visions of the World Cup. And it can start now, with Brazil.

Read all entries in the Re-Think the World Cup blog series.