From marches, to picket lines, to jail houses, this song, along with countless other freedom songs, echoed through the 1960s to display determination and to keep the spirit of a whole movement alive in order to end racial segregation and discrimination in the United States.

The 1960s was a time of transformation and revolution around the world. Throughout Africa, nations such as Malawi and Zambia were gaining independence after centuries of colonial rule. Meanwhile, in the United States, in particular the Deep South, African-Americans were still being treated as second-class citizens under the Jim Crow system.

Fed up with racial discrimination and frustrated with the lack of implementation of federal laws to desegregate, African Americans throughout the South challenged Jim Crow through aggressive nonviolent resistance in the form of sit-ins, boycotts, Freedom Rides, and mass mobilization.

By 1964, through the organizing efforts of groups such as Student Nonviolent Coordinating Committee (SNCC), Congress of Racial Equality (CORE), and the Southern Christian Leadership Council (SCLC) lunch counters, movie theaters, and retail stores were desegregated, southern universities started to integrate, and over 250,000 people joined the March on Washington in front of the Lincoln Memorial to demand racial justice. 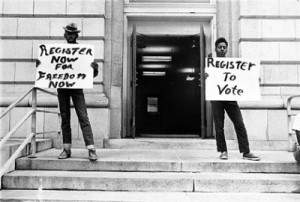 Despite constant and real threats, those in the civil rights movement kept marching forward and set its sights on the state with the lowest percentage (5%) of voting-age African-Americans who were actually registered to vote despite having the largest black population in America: Mississippi.

So, in the summer of 1964, a mass voter registration campaign called the Mississippi Freedom Summer Project, otherwise known as Freedom Summer, was coordinated.

Over 1,000 volunteers came to Mississippi for Freedom Summer and got to work knocking on doors encouraging folks to go down to the county courthouses to register to vote. To go along with this effort, a network of Freedom Schools were set up throughout the state educating men a 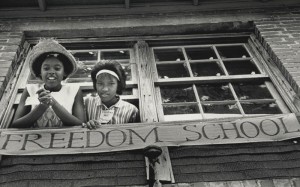 nd women on voting requirements and preparing them for questions that would be asked on literacy tests.

And the Freedom Schools were not limited to those in the community who were of voting age. The Freedom Schools were open to people of all ages, young and old, and not only focused on explaining the details of voting rights, but the schools also gave students the tools to achieve social change by encouraging them to become active and socially involved in their communities. 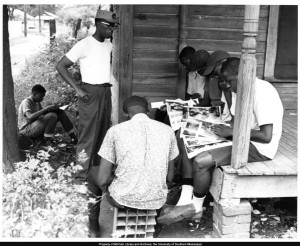 Freedom Schools challenged students to ask critical questions about the status quo, and to learn through discussion rather than through the memorization of facts. Lessons on African-American history, political power, and the Freedom Movement sought to develop a political awareness among the students and to foster leadership and organizing skills that would lead to a new generation of movement activists.

According to SNCC field secretary Charlie Cobb, who in 1963 proposed the implementation of Freedom Schools, the schools would “create an educational experience for students which will make it possible for them to challenge the myths of our society, to perceive more clearly its realities, and to find alternatives — ultimately new directions for action.”

By the end of the summer, the Freedom Schools reached over 2,500 students, successfully registered over 17,000 black voters in the state of Mississippi, and created a new confidence in people to take political action. Civil rights leader Fannie Lou Hamer said of the campaign, “[b]efore the 1964 project, there were people that wanted change, but they dared not come out. After the 1964 people began moving. To me it’s one of the greatest things that ever happened in Mississippi.” 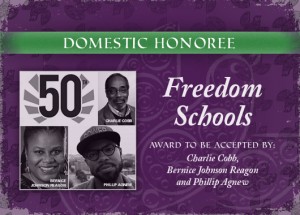 The Freedom School model taught people that anyone could be a changemaker in their communities. It displayed that the grassroots are the foundation to a strong movement and everyone is empowered to take part in making a big impact on society at large. Every action, big or small, contributes to the larger victory, as long as we keep up the fight.

Which is why on May 8th 2014, Global Exchange is proud to honor the 50th Anniversary of the Freedom Schools at our 12th Annual Human Rights Awards Gala in San Francisco. Accepting the award will be former SNCC field secretary Charlie Cobb, Bernice Johnson Reagon, a founder of the Freedom Singers and Executive Director of the Dream Defenders, Phillip Agnew. 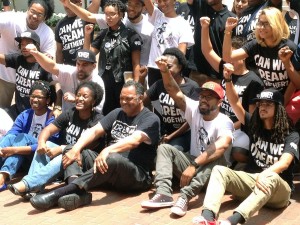 The award will not only honor the impact and legacy of the Freedom Schools and that Freedom Summer of 1964, but it will also recognize the work being done today, 50 years later by organizations like the Dream Defenders who are cultivating the next generation of civil rights leaders and who are continuing to tackle existing injustices and using the blueprint that the Freedom Schools left behind to help young people keep marching on to that freedom land of true justice for all.