And the 2014 What About Peace? Contest Winners Are…

After months of going through the hundreds of entries that came in from youth all over the world, Global Exchange is proud to announce the winners of the 2014 What About Peace contest!

A very special congratulations go to our 2014 Grand Prize winner, 15 year old Ikeora Ebuka from the Imo State of Nigeria, with the written essay about child soldiers called “They Learned to Kill.”

What struck our Grand Prize judge, Global Exchange’s Executive Director, Carleen Pickard, the most about the winning piece was

“the thought and consideration that Ikeora put into the essay; it encourages us all to take action daily in our community to make peace at home.

Ikeora is exactly right in saying, ‘through our intention and actions, we choose the bring positive experiences into our lives and make them for others. We can all do something.’ This essay inspires me to get up and take action right away. And I’ll remember to do something positive tomorrow, and the next day, and the next …” 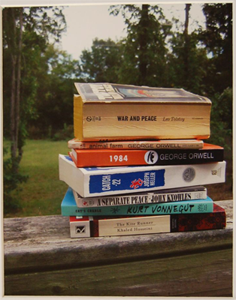 In the visual category, the First Prize Winner is a beautiful photo of books by Afshin Valani entitled: The Story of Peace. Judge, Richard Kamler said he liked the formal composition, the way the books stood out in the foreground engaging us in the text – from War and Peace to the Kite Runner. And he especially liked the fact that the books looked like they had been read!

The First Prize Written work is a poem called A Peace Anthem by Mac R. Whaley of Rollingstone, Minnesota. A poem that was called riveting and spirited by the judges who liked the rhythmic approach to answering the question, What about Peace?

Congratulations to our second prize winners too.

In the visual category, we have a piece called Everything Peace from Sophia Diaz of San Diego, CA. Judges were drawn in initially by the complexity of the collage. “When you can’t read a piece of art at first, it draws you in; even the third and fourth times I saw something new. I like the mask quality of shadow and light and the different textures” said Judge Kamler.

Scott Ward’s short story, What About Peace was a neatly constructed comparison of waking up to face the day as a high school student and then as a soldier. “The writing was compelling and original “ said Pam and Michael Rosenthal, the writing judges.

The judges also had some great things to say about the runners up from both categories. Third prize poem, My Name is Peace, by Alexandra Tran of Omaha, Nebraska’s lyrical lines linked peace to a dance through floating dandelions, to a trigger for revolutions.

And third prize visual is Brandon Tran’s exuberant pen and ink drawing of a peace demonstration entitled The Strike, which, according to judges, is so dense and chaotic, just like peace itself. It has a child-like quality without being childish and talks about serious issues without being pretentious.

Check out our website for a listing of all our winners in each category as well a listing of our Honorable Mentions and the recipients of the Jurors Awards.

Congratulations once again to the winners and thank you to all for sharing your beautiful work letting us all know that peace is possible.