Camilla Schneider, a long time member of Global Exchange and a board member of the Marin Interfaith Task Force recently returned from a trip to Venezuela where she witnessed first hand the power of new media for social disruption. She was interviewed by Global Exchange co-founder, Kirsten Moller. Global Exchange has been sending Reality Tours to Venezuela for many years with three new trips listed for 2014 and has long understood that the U.S. media isn’t always telling the full story when it comes to Venezuela. During the rise of the social movements in 1998 and the election of Hugo Chavez, there was concerted effort to paint the charismatic leader as the source of all anti-imperialist sentiment and redistribution of wealth rather than the result of many people’s work. The attempted coup of 2002, which removed Chavez from power for all of 47 hours, was also a story, which got strange international press, recognizing Pedro Carmono as the de-facto president and initially avoiding the word “coup” for the take over.

Recent revelations about U.S. funding of new social media, “twitter-like” strategies to collect names of young people who might be stirred to undermine the Cuban government have got me thinking that this tool, so highly touted in the “Arab Spring” might have fallen into the wrong hands. We’ve all been captivated by stories in Egypt and the Ukraine about the power of social media to move students to protest and to topple regimes. 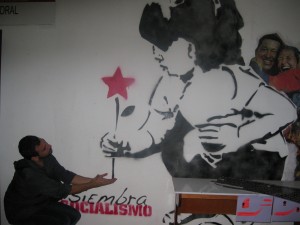 electoral process after Nicolas Maduro narrowly won the presidential election after the death of Hugo Chavez. His main opponent, Henrique Caprilles refused to accept the legitimacy of the election and counted on municipal elections in December to ratify dissent against the government. Despite major problems with crime and inflation, the people again ratified the government-sponsored coalition, the “Polo Patriotico”. There are no more elections scheduled until the end of 2015. With no electoral route to follow – the right wing decided that protest and social disruption was the only way to was the only way to topple the current government and that has been their strategy since the unrest began on January 23rd. They announced a campaign for “la Salida”, an exit strategy that was intended to create chaos in the streets — “in every corner, every market, every school and every university”, according to Carmona.

For a clear and cogent synopsis of the different currents and characters at work see our friend Miguel Tinker-Salas’ article in Common Dreams (Tinker-Salas is a professor at Pomona State who worked with Global Exchange on the Caravan for Peace with Justice and Dignity).

Camilla’s group met spent 7 days in the country meeting with government officials, including the ombudsman’s office, students and ordinary people in different regions. She says it is clear that there are real problems – with high inflation, too much crime and shortages, but the causes given for the problems vary depending on the social and class backgrounds of the people trying to make sense of it all. In the rural areas there still seemed to be overwhelming support for the current government while upper class neighborhoods constructed barricades around their enclaves to keep the National Guard out and pro-Maduro forces out. Angel Vivas – a retired general, tweeted out instructions for stringing wire tautly across roads in order to behead motorcyclists in order to “neutralize the criminal hordes” . The National Guard uses motorcycles to get around and private citizens on the bikes tend to be those with less money. When a federal police officer tried to remove a privately erected barricade and was shot by a roof-top sniper, the police response of entering the building to look for the sniper was tweeted out with photos decrying “police repression”.

Many of the photos depicting police brutality are not even from Venezuela, including the infamous 2011 picture from UC Davis where police pepper sprayed Occupy protesters. Pictures from the earthquake devastation in Japan and protests in Chile have also been sent out on social media as evidence of the crisis in Venezuela. Images, even false ones burrow deep into our consciousness and when confronted with the misinformation the right wing claims to have just been “overly enthusiastic”, according to the report from the delegation. Camilla adds that students from both private and public universities have been paid stipends to come to the US to learn social media skills in order to switch tactics away from the electoral to a media war. Unfortunately the international press is relying too heavily on the unsubstantiated claims of the trending social media memes.

The responsiveness of the government to opposition complaints, has been largely over-looked by the international press. Maduro held a peace conference with business leaders, mayors and the papal nuncio and received 57 suggestions for ways to handle the crisis. Fifty-three of the suggestions were agreed to by the government and yet the international media called it a failed conference. In a meeting with the ombudsman, the group heard her say with some level of frustration: “We have to handle complaints against the security forces with a hard hand, and we cannot touch the opposition with a rose petal. ” She complained that human rights groups won’t report the cases of abuse they write about to her office and instead use unsubstantiated claims to spread misinformation to de-legitmize and destabilize the government.

Why is this happening I asked. “Its not the oil”, says Camilla, “though we do get 16% of our oil from there, but that isn’t the key interest in this destabilization; its the Bolivarian revolution’s whole new way of thinking about Latin America and justice. The world needs places for how a government and the people relate and Venezuela has empowered the people to build a new relationship.” It would be a shame for 140 characters to be the key to destroying that relationship.

TAKE ACTION! 1 ) Go and see for yourself – Join a Reality tour to Venezuela 2 ) Oppose sanctions. House Resolution 488 passed in March, calling for an end to the violence but also threatening sanctions. Venezuela needs more people to know what is really going on and to call and educate their representatives.