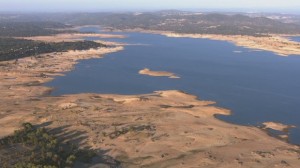 From the “30,000 feet in the air” perspective, water politics in California have always been  confused and complicated.  It is a state prone to drought, but this time is different—not just the worst in history—climate and water  experts are speaking of this as the “new normal.”  Ranchers are selling cattle they can’t find or afford to feed water-intensive crops like alfalfa, and towns are counting water in mere days.  Where water still runs clean, like Mt. Shasta, Crystal Geyser corporation is intent on taking, bottling and selling unlimited quantities, while central valley farmers with water contracts from the Sierra Mountains have been cut off.  In Sacramento there has been a  surreal resurgence of talk of peripheral “twin tunnels” to increase delivery of water for industries like fracking to the drier counties in the southern part of the state.

From far above, none of this makes any sense, and begs the question: how should decisions about water be made?

Swooping down for a bird’s eye view: Residents in Mendocino County area gearing up to answer that question in a way that may spark a new statewide conversation.  Mendocino County is located on the north coast of California, and means many things to the folks who live and visit: it sits on land of 9 Native American tribes and is in the heart of wine country; farms and ranches spread throughout its nearly 4,000 square miles producing huge quantities of food for the state and nation; the mountains are alive with fern groves and giant Redwoods (and yes there’s that other seven-leaf culture there as well).

But troubling this idyllic land of grace and plenty is the perfect storm of water emergencies.  The Mendocino County Board of Supervisors unanimously declared a local emergency “and 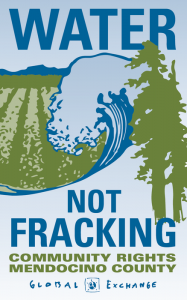 imminent threat of disaster” from drought conditions.  Fears over the raising of the Lake Mendocino dam (and Shasta dam further north); the increasing water demands by the growing wine infrastructure; water squabbles with neighboring Sonoma County; the heavy use of hack-and-squirt herbicide by giant industrial loggers poisoning rivers, streams, and dwindling public and private wells; the takeover of marshlands for highways; water takings, the list goes on.  Despite all of these threats, guess what’s in the plans for 2015. Fracking (both offshore and inland).

Residents in Mendocino have another idea for water management—local control.

If there has ever been a region more ready to assert their right to local self-governance, and take it countywide, it’s here. For the past years and increasingly the last few months, Global Exchange has been talking to community members from all parts of the county interested in exploring how organizing for community and nature’s rights can serve as a tool for putting decision-making around water protection in the hands of the residents who live there, and no where else. Partnering with Global Exchange and with legal support from CELDF, they seek to pass a series of rights-based ordinances that protect local water, starting with banning hydro fracking before it begins. This will be the first rights-based county ordinance in California, and only the second in the nation. “It is our greatest hope to stop the diversion and poisoning of billions of gallons of local water,” says Willits resident Peter Norris. 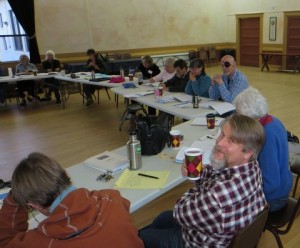 Norris has been working on building this idea in his community for some time, and helped organize a number of trainings including a Democracy School and organizing workshops with Global Exchange, CELDF and other rights-based teachers including Prajna Marcus and Paul Cienfuegos.   Says Norris, “It has been amazing to watch our community rights group blossom to almost 100 active members in just 9 months.  Community members feel inspired, and see a real solution to creating greater local self-governance.  As corporate powers increasingly threaten our ecosystems we are now exercising our sovereign rights to protect them.”

Residents of Mendocino county feel strongly that decisions about water here should be made locally and should be focused on the rights of community and our ecosystems, and enforced by law. 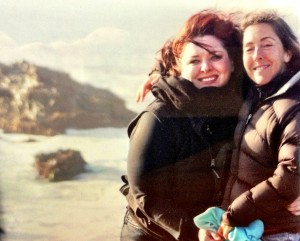 Workshop facilitators Shannon Biggs and Prajna Marcus enjoying the view on the coast of Mendocino.

At the community rights organizing training facilitated by Global Exchange and Prajna Marcus held in Fort Bragg April 30, over 40 people were on hand to form the Community Rights Network of Mendocino County (CRNMC).  As a CRNMC coordinator Kelly Larson of Ukiah says, “We will be launching a website and Facebook page, hosting local events and engaging residents and allies statewide to help create a powerful new voice for the protection of water in California and put it into law.”