The Glue that Held the Drug War Together is Coming Apart

The glue that held the Drug War coalition together is coming apart. Even though few but the most die-hard drug warriors believe the fight is winnable, the so-called Drug War, the fight continues, at great cost to communities throughout North America.

In this article from Yes! Magazine, Wendy Call talks about victims of this “War Against the People,” like Javier Sicilia, who have repeatedly brought this message to dozens of cities in the U.S. and Canada. 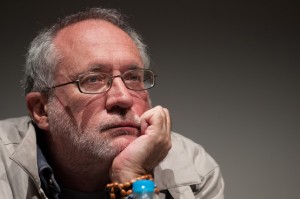 Legalization is a Human Rights Issue: Latin America Steps Up Resolve to End the Drug Wars

Seattle’s South Park neighborhood has seen its share of drug-related crime and violence. Many of its residents are recent immigrants from Mexico; some came north fleeing the drug cartel violence that has ravaged their home communities. So the South Park Community Center was a poignant venue for Mexican poet, writer, and activist Javier Sicilia to speak about his campaign to end the drug war in his home country. He began the evening with a moment of silence for all the lives lost – somewhere between 60,000 and 100,000 – since the Mexican government stepped up the war against drug cartels in 2006. Then, his commanding voice heavy with grief, Sicilia read a poem:

All absence is cruel

and nonetheless, remains like a space that comes from the dead,

from the bleached roots of the past.

Sicilia wrote this poem, “The Survivor,” in 2009. Two years later, he became a survivor of heartbreaking absence himself, when his 24-year-old son was murdered, with six of his friends, by drug traffickers in Cuernavaca, Mexico. With the cruel loss of his son, Sicilia did not know where to turn. He wrote a final poem dedicated to his son, Juan Francisco, and then renounced writing poetry.

Nonetheless, Sicilia continues to write tirelessly: essays, journalism, and speeches protesting Mexico’s drug war. He has called international attention to the war’s almost unspeakable violence, in which, as he described it that evening in South Park: “[People are] decapitated, dismembered, stuffed into trash bags and left under bridges, put into crematoria or barrels of acid so that even their fingerprints are erased. So all physical evidence is erased. There is no list of the tens of thousands who have disappeared. There are no fingerprints.”

The drug war has devastated so many lives on both sides of the border. How can we stop it? Where might we turn? In the last few years, Sicilia and many others have begun to answer these seemingly impossible questions. After his son’s murder, he walked the fifty miles from his home in Cuernavaca to Mexico City in protest, following the country’s long tradition of protest marches to the nation’s capitol. On April 3, 2011, he published “An Open Letter to Politicians and Criminals” in Proceso, Mexico’s most important newsweekly. It quickly circulated across the country and then around the world, with a title taken from the letter’s refrain: “¡Estamos hasta la madre!” This Mexican colloquialism is far more powerful than its English equivalent: “We’ve had it up to here!” In his letter, Sicilia noted that he and others in his home state of Morelos would be taking to the streets. He invited others to join their effort, and tens of thousands of Mexicans in forty cities did.

Read the rest of the article over at Yes! Magazine.