The following was written by Maha Azhari and Ted Lewis. Maha, 23, is a German-Syrian political science-student at the University of Applied Science in Bremen in Germany. She interned with the Human Rights Program of Global Exchange during the winter of 2014.

Russia has been in the news a lot lately, successfully hosting the winter Olympics and now playing a winning hand of old school brinkmanship in the Ukraine. But while world attention is fixated on Vladimir Putin and the apparent annexation of Crimea, a great massacre continues to unfold in Syria, Russia’s most important and most brutal ally in the Middle East.

Russia used the Olympics to smoke screen its opposition to a draft resolution that condemns rights abuses by Syrian authorities and armed groups. It calls on the government to stop all aerial bombardment of cities and towns as well as the indiscriminate use of bombs, rockets and related weaponry. It also condemns “increased terrorist attacks,” and calls for the withdrawal of all foreign fighters from Syria. 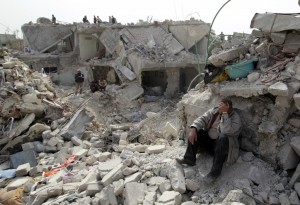 Russian Foreign Minister Sergei Lavrov rejected what he called “one-sided accusations” against Syria’s government that would pave the way for foreign military intervention. He rejects sanctions on individuals and entities obstructing aid and failing to comply with the demands of the resolution.

In late February, the UN Security Council was able to pass a resolution within which Russian and Chinese backing, but all it asks is that U.N. Secretary-General Ban Ki-moon report to the council in 30 days on implementation and “expresses its intent to take further steps in the case of non-compliance” with humanitarian criteria. The catch? Russia is unlikely to agree to any action if Syria’s government was found to be in non-compliance.

The Syrian government and opposition agreed to pause in hostilities allowing the delivery of aid and the evacuation of civilians from Homs, Syria’s third-largest city where at least 2,500 people remain trapped. Only about a tenth of these desperate women, children, and men (over 55) were rescued.

People still in the war zone are slowly starving or dying from lack of medical help. More than 136,000 people have died in the last 3 years, and 9.3 million people are displaced. Observers estimate that just during the nine days of the nearly fruitless Peace Conference in Geneva, 1,870 died.

A numbingly frequent scene in Syria these days involves a child’s body being pulled out from under debris. Children, women, and elderly men live in agony, searching for scarce food in Syria’s besieged suburbs or refugee camps.

And because the civil war has festered, Syria has become a magnet drawing in Islamic extremists, Hezbollah, and other non-state actors in the surrounding region. There are many regional and international stakeholders in this situation. Tehran, Washington, and Moscow are all linked to players on the ground, making any quick resolution nearly impossible.

Geneva Peace Conference and Russia’s veto
During the Geneva Peace Conference II on Syria which was held from February 10th to February 15th 2014, Australia, Luxembourg, and Jordan presented a draft which prompts all sides in the civil war for restraint. Assistants should have unhindered access to those in need. In the event of refusal, penalties are brought into play.

Russia vetoed this resolution and called it “unacceptable”. The government submitted a counter-proposal on Wednesday 12th, which is substantially weaker than any previous draft proposals. Thus, the Russian draft simply appeals for good behavior without any provision for sanctions should the Assad government fail to comply. This is the third time that Russia has used their veto to protect the Syrian Government.

Why Russia is protecting Syria
Why does Russia continue to support Syrian President Bashar al-Assad despite documented evidence that women and children are being targeted and tortured and comprise a large proportion of the tens of thousands of non combatant deaths?

Russia is sticking with the regime because for more than half a century the two countries have shared a close relationship, and Syria remains Russia’s closest Middle Eastern ally. After the Suez Crisis in 1956, Syria followed Egypt’s lead by acquiring arms from the Soviet Union, and as the Baath part became ascendent in later years, ties between Syria and the Soviet Union grew ever closer

Russia clearly doesn’t want to lose its closest ally in the region, especially since Russia has also commercial and strategic interests in Syria. In Tartus, Syria hosts the sole remaining Russian naval base on the Mediterranean, currently being refurbished by 600 Russian technicians after long disuse. Giving up this Middle Eastern beachhead would be perceived as a great loss to the Russians.

Russian companies have also major investments in Syria’s infrastructure, energy and tourism sectors, worth $19.4 billion in 2009.

What is going to happen in the future
Now, because foreign organizations with an Islamic extremist orientation (like al-Nousra-Front, ISIR, and al-Qaida) have arrived to fight in Syria, there exists the real possibility that they might be able to establish an Islamist state in Syria were the Assad regime overthrown. Syrians both inside and outside the country have expressed their fear that because the West has not provided effective help, the unprotected Syrian population has little recourse but to accept the aid of and give their allegiance to these extremist forces.

Now a vicious circle has formed: the West was afraid to deliver weapons to the Free Syrian Army out of fear that they might end up in the hands of Al-Qaeda fighters. But the longer they hesitated, the more Al Qaeda was strengthened. To the extent in which the FSA did not receive significant support from the West, their men ran in rows over to the Islamists.

This led to the development that the FSA and the exiled opposition associated with it have become unimportant. Whereas the two Al-Qaeda branches occupy more and more space – and so much that Assad, who has always warned his downfall will attract a takeover by Al-Qaeda upon itself, could be right.

What are the options in assisting the Syrian civilians?
Since Russia has consistently refused to sign any of the proposed UN resolutions, options for the international community are limited. Earlier this year, the United Sates administration proposed military intervention but quickly backed off in face of domestic pressure, and a measure that Russia supported to peacefully destroy Syrian chemical weapons capacity.

Nevertheless, since the crisis began, the United States has provided more than $1.7 billion in humanitarian aid, much of it destined to aid refugees and host communities in the neighboring countries. Despite this aid, the humanitarian crisis within Syria continues to deepen, violence against civilians continues, and refugees keep pouring out of the country.

Yet even in this grim context there are still potential avenues for action open to the international community, NATO aligned countries and the UN. Some affect the field of battle, others are more strictly humanitarian.
The Washington Post’s Max Fisher speculated early in the conflict that sharing intelligence with the rebels could help repel Assad’s advantage without actually arming the rebels. Providing them with more sophisticated gear, including RPGs, night vision goggles and better communication equipment, would likely enable them to neutralize Assad’s tanks and possibly free entire towns. It is probably too late for such action to alter the course of battle.

Nevertheless, one line of action that member states and regional organizations could take on is to impose sanctions on those countries still supporting the Assad-Regime with weapons and other strategic support. As long as as Russia, Iran and North Korea are free to send weapons to support the Syrian Army without any cost, they will be able to supply the the regime with the means to continues its brutal internal war on dissidents and their allies.

Human Rights Watch has examined the idea of referring the Syrian case to the International Criminal Court (ICC). Six current members of the security (France, the United Kingdom, Luxembourg, Argentina, Australia and South Korea.) council support this idea but there are two chilling obstacles. First, Syria (like the United States) has never recognized the jurisdiction of the ICC. Second, a Russian veto could easily derail such security council action.

In the face of this crisis, countries around the world should do what they can to ease the suffering of refugees.

Since the civil war started three years ago more than 135,000 Syrians applied for refugee visas for the U.S., but less than 5,000 have been accepted.

Because U.S. asylum status is open only with those who can demonstrate a personal threat of persecution, many who are genuinely threatened by general conditions but who cannot demonstrate a specific individual threat are excluded. We encourage the Obama administration to use executive discretion to overcome the bureaucratic hurdles standing in the way of granting far more temporary visas to those fleeing violence in Syria.

The US has called on Jordan, Turkey, and Lebanon to keep their borders open to Syrians seeking asylum. For both humanitarian and security reasons – and out of respect for those allied countries – the US should now also open its border to Syrian refugees.

Also, other governments around the world should be more open to Syrian refugees. This is a global responsibility that should not rest only on the shoulders of Syria’s neighboring countries. This situation is tremendously frustrating to citizens and civil society actors who feel powerless to provide real assistance. And as unpleasant as it is, we need to keep in mind that this brutal civil war is unlikely to end quickly or cleanly.

Private donations can make a difference to individuals and even whole communities affected by the conflict, but no amount of philanthropic dollars can buy and end to the horror of this war. And as a cause célèbre, it is not attractive. In the three months after the deadly typhoon in the Philippines more money was raised for assistance than has been raised during the entire three years of Syria’s war.

Donations for Syrian relief are being channeled though the Champion the Children of Syria website. We cannot vouch for how this money is being distributed, but it is one way to be involved. The other thing it is important to do is stay informed and build ties to Syrians in the new diaspora who will eventually return to build the new Syria that will eventually emerge from this cruel cauldron.