HP: Profiting from the Occupation

We’re going to a meeting, and we want you to join us. It won’t be boring, we promise. 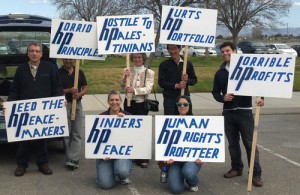 On Wednesday, March 19th – 1200 PM, Hewlett-Packard is hosting their annual annual shareholder meeting. The company is a Bay Area fixture, and well known worldwide for producing computers and printers. But we’re not going there because we want to talk toner. We’re going because HP is violating the rights of Palestinians.

First, join us for an organizing training on March 6th at La Pena Cultural Center 3105 Shattuck Avenue, in Berkeley, CA. Then, join us at the Santa Clara Convention Center, 5001 Great America Parkway, Santa Clara, California 95054 on the 19th, and let HP know that good business practices are not compatible with supporting the occupation.

And to give you inspiration to join us, here’s some background on HP’s complicity in the Occupation of Palestine.

Hewlett-Packard and the Occupation

Hewlett-Packard, headquartered in Palo Alto California, is one of the world’s largest electronics companies, with an annual revenue of $112 billion.  A strong market share in laptops, printers, and Information Technology infrastructure drives sales, while lucrative government contracts within the United States and internationally provide another solid revenue stream.

HP public relations material presents the company as a responsible corporate citizen, outlining on their website the generosity of a massive charitable giving foundation and glowing statements from CEO Meg Whitman on the topic of corporate responsibility.

But these claims of good corporate citizenship crumble in the face of Hewlett-Packard’s complicity in the Israeli Occupation.  HP Israel provides technology for hundreds of checkpoints throughout the Occupied Territories.  Hewlett-Packard is also a major player in the development of the biometric identification cards used throughout Israel, providing the software for the population registry system.  And the Israeli military runs on HP hardware and software, as HP Information Technology  infrastructure is used by the Israeli Navy and Israeli Defense Forces.

In 1999, the Israeli government announced the winner of the bid to develop new checkpoint infrastructure: Electronic Data Systems, (later acquired by HP).  The measure, known as the Basel System,  was aimed at making the checkpoint system less overtly dehumanizing, a way to impose technological means to reduce ‘dangerous friction’ between Palestinians and Israeli soldiers at checkpoints.

Though Israel claims the checkpoints act as a security measure, the fact that over half of these checkpoints are located within Palestinian territory belies this particular claim.  A 2007 report from the United Nations Office for the Coordination of Human Affairs notes that 2.4 million people in the West Bank are affected by physical impediments to movement. 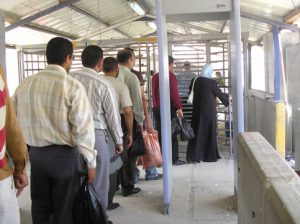 Development of the Basel system was financed by the United States through the terms of the Wye River Memorandum, the 1998 US-brokered agreement between the PLO and Israel. Stage one of project development concerned checkpoints for Palestinians moving from the occupied territories into Israel, while stage two developed a similar system for international immigrants at Israeli borders.

Development began on phase one in 2000, and on phase two in 2003.  When Hewlett-Packard acquired Electronic Data Systems in August of 2008 for $13.8 billion, they became managers of the Basel system.  As part of the process of managing the checkpoints, HP has subcontracted On Track Innovations, an Israeli based company with experience in contactless systems — notably the MasterCard PayPass payment processing system.

Speaking about the Erez checkpoint between Gaza and Israel, the director of Global Marketing for On Track Innovations Ohar Bashan claimed that the Basel System “will significantly improve the security, the speed and the relationship between Palestinian workers and the soldiers. The Palestinians crossing over will not need to be interrogated.”

Instead of interrogation, the Palestinians crossing over present a contactless magnetic smart card and face biometric identification systems that measure their face and hands.

Across the Occupied Territories, the ‘friction-reducing’ measures of the Basel system, provide an instructive insight into the dehumanizing processes Palestinians endure in traveling.  Inside antiseptic checkpoint facilities, security officials watch from behind one way glass while Palestinians remove all of their belongings,  the subject moving on to another room while Israeli officials enter and rifle through their possessions.  As this technology spreads across the hundreds of checkpoints faced by the Palestinians, Hewlett-Packard bears the brunt of the corporate responsibility for development and maintenance of this system.

The “Aviv” population registration system, operated by Israel’s Ministry of the Interior, is a comprehensive population registry, managing information on age, race, address, country of origin, and religion for Israeli citizens and residents.  Hewlett-Packard manages the “Aviv” registry, following their acquisition of Compaq Computers in 2002.  Maintenance of this population registry system is integral to Israel’s continued repression of the Palestinian people.  The Israeli-based NGO Coalition of Women for Peace describes the import of these measures:

“The Israeli ID system, which is used to privilege Jews and differentiate among all others, stems from a strategy of stratified citizenship….the Israeli ID cards can be grossly categorized by the color of their plastic casing: blue for Israeli citizens and permanent residents, orange/green for Palestinian in the oPt [occupied Palestinian territories]….until 2003, the blue IDs included the label of ‘nationality,’ under which Israeli citizens were listed as Jewish, Arab, Druze, Bedouin, etc. In 2003, the nationality label was replaced with asterisks. However, the ethnicity is still listed in the population registry and additional notations enable distinguishing between Jewish and non-Jewish Israeli identification card holders.”

Hewlett-Packard is also staged to provide the next generation of population control technology.  In 2009, the Israeli Knesset passed the Biometric Database law, mandating all Israeli citizens and residents provide fingerprint and facial recognition data to be stored in a national database.  Hewlett Packard won the bid to provide the magnetic identification cards for this new system, though the outcry from civil liberties groups within Israel has stymied the roll-out, withe High Court of Justice ruling in July of 2012 that the government must present a clearer criteria for what the success or failure of this new system might entail.

Regardless of which direction this registry takes, Hewlett Packard is poised to capitalize: in 2010, the Israeli government renewed their contract with HP for 3 more years for $6 million.

In 2006, the Israeli Navy chose Hewlett-Packard to outsource all of their IT infrastructure, including computing and communications centers.  HP’s market share within the military grew in 2011, when Hewlett Packard won the largest ever bid for contract services to the Israeli Defense Forces for maintenance of their server farms, estimated at $124 million.  The CEO of HP Israel proudly announced, “This win will strengthen our position as the leading technology company in Israel, and I have no doubt that that it will represent a real partnership in which we are committed to provide the client with the best solution for it over the next five years, and possibly beyond.”  Beyond server farms, HP is also the exclusive provider of printers and laptops for the IDF.

The IT services HP provides are essential the to Navy and IDF’s operations; no modern organization can survive without the complex hardware and software systems provided by firms like HP.  These systems form the communications backbone of the Navy and the IDF, institutions whose crimes and abuses against the Palestinian people are too numerous to recount. Just the last decade provides us with Operation Cast Lead, the attack on the Gaza Flotilla, and countless attacks on Palestinian fisherman within territorial waters.

Tom Hogan, HP’s senior Vice President of Software, stated in a 2006 press conference that “Israel is the company’s winning ticket.”  This winning ticket provides HP with millions of dollars in revenue each year and a dominant position in the Israeli technology market.  But HP’s activities have not gone unnoticed by pro-Palestinian activists.

Activist organizations including We Divest, End the Occupation, and the Palestinian BDS Movement all continue to spread the word  about HP’s ongoing role in the Occupation.

“By developing and maintaining the BASEL checkpoint system that is installed in checkpoints deep inside occupied Palestinian territory and providing IT equipment and services to the Israeli military, HP has become an active participant in Israel’s grave violations of international law. Israel maintains a system of apartheid over the Palestinian population – a system that HP has chosen to support and profit from,” said Michael Deas, coordinator in Europe with the Palestinian Boycott, Divestment and Sanctions National Committee, the broad coalition of Palestinian unions, NGOs and organizations that leads the BDS campaign.

If you want to do something to stop HP from profiting from the Occupation of Palestine, join us for an organizing training on March 6th at La Pena Cultural Center 3105 Shattuck Avenue, in Berkeley, CA.

Then, join us at the shareholder meeting on March 19th, at the Santa Clara Convention Center, 5001 Great America Parkway, Santa Clara, California 95054 on the 19th.