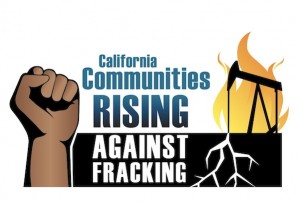 While Governor Brown has declared the worst drought in state history, reservoirs and lakes have desertified, and some towns are counting water reserves in terms of days and weeks—yet fracking is beginning to boom here.

That’s right, fracking—which uses up to 8 million gallons of water per operation (each well can be fracked up to 18 times), and leaves behind water so poisoned it cannot be cleaned. 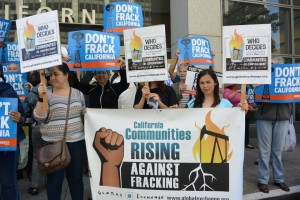 Last year the landscape looked very different, most people had never heard of fracking. Global Exchange sounded the alarm with a statewide California Communities Rising Against Fracking tour, bringing a dynamic duo, Briget and Doug Shields—a fractivist and her husband the Pittsburgh, PA city councilman who passed the first community rights fracking ban. Our statewide allies joined us and with community activists we helped elevate Californians’ understanding about the dangers of fracking. It was a huge success.

Along the way we had politicians begging us to join one of several stops to showcase their concern. Then those politicians let the people down, letting more than a fistful of fracking bills die, and passing one regulatory bill so weak it actually helps corporate frackers. Then the Governor turned his back on the people, and endorsed fracking. The result? More and more communities are turning to themselves to stop fracking, by banning it locally, and we’re working with as many communities statewide as we can to assert their right to do just that.

Join us and all of our statewide and national allies as we hit the road again this March for the Cautionary Tales of Fracking Tour in California, spurred by the Stop the Frack Attack Network (STFA), of which Global Exchange is a steering committee member.

We are bringing four speakers from affected communities in Colorado and New York not just to hold up a mirror for what fracking can do but to demonstrate that the power communities have to stand up to fracking.

One of the speakers coming is Shane Davis, credited for starting the anti-fracking movement in Colorado who says:

The burning energy of fractivists world-wide will outlast all the UNnatural gas [and oil] the industry could ever extract.

Shane Davis is a data-miner, activist, research biologist, and the founder of Fractivist.org, a ‘not for profit’ anti-fracking investigative blog about the Colorado Oil and Gas industry and the Oil and Gas Conservation Commission. Shane is a nationally recognized expert data-miner and analyzer of official oil and gas documents. He publishes documents that bring to light the truth about extractive mining that uses hydraulic fracturing and its collective adverse impacts to the environment and to human health. His research and data have empowered dozens of grassroots organizations in many states which use it as a center piece for anti-fracking movements and public debates nationwide.

The rest of the all-star  line-up of speakers will include Pramilla Malick, Deborah Cipolla Dennis and Rod Brueske.

Pramilla Malick  is a journalist, blogger, community organizer, and a mother of 4 children. She studied anthropology at the New School for Social Research and  founded two grass-roots organizations in upstate New York to fight fracking-related gas infrastructure: StopMCS (opposing a compressor station) and ProtectOrangeCounty (natural-gas-fired power plant). She is also a petitioner in a federal case against the Federal Energy Regulatory Commission in the U.S. District Court of Appeals.

Deborah Cipolla Dennis is a community activist from Dryden, New York. Dryden was one of the first municipalities to ban fracking in New York. They were quickly sued by Anschutz and then by Norse Energy. However, the ban has been upheld by two state courts and is pending in New York State’s highest court. With pro bono legal support provided by Earth Justice, Deborah’s group has been together for almost four years and has been instrumental in pushing anti-fracking laws in her town and shaping local election results.

Rod Brueske is a Colorado farmsteader who’s family has been adversely effected by fracking. To protect his family and community, Rod has worked with many of the Colorado-based grassroots activist groups to build a strong opposition to Oil and Gas development in the community. Rod has been very vocal in the national conversation of fracking. Last May, Rod was invited by Earth Justice to DC  to lobby and speak at Stop the Frack Attack.  He will also be appearing in the documentary Groundswell and other film shorts.

The tour will start off March 15 in Sacramento with a huge rally at the capital. Meet us at the State Capitol, South Law, Sacramento between 1pm-4pm! Busses are being organized to bring residents from all over to join the rally and let the governor know that you can’t be a climate defender if you endorse fracking. The tour then leaves the capital for the real houses of power—affected communities in Fresno, Kern County and Los Angeles.

Global Exchange will be mobilizing our members to participate, and we are also leading trainings at each tour stop on how to pass a local ordinance to ban fracking and assert community rights.

Five years ago, Global Exchange launched the Community Rights Program confronting corporate power at its core: by challenging unjust laws and shifting the balance of power from one that protects the rights of corporations, to one that protects the rights of our communities and the environment. The Community Rights Program enters the California and national fracking debate via our expertise in grassroots, “rights-based” organizing, where we work with communities confronted by various corporate harms to enact local laws that place the rights of residents and nature above corporate interests.

A rights-based approach not only offers communities a way to stop the harmful practices of fracking in their midst, but addresses the core issue of a system of law that legalizes harmful corporate practices like fracking. We’ve already been working with a handful of communities to pass rights-based fracking bans, including San Luis Obispo, and Culver City, and we hope to be working with many more.

Learn about our rights-based approach to fracking in this video: 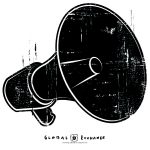