The only time I yelled at the TV during the Super Bowl was when Scarlett Johannson appeared, talking about SodaStream. She shed her robe and declared in a sexy voice –“I just love helping people”.  I almost choked on my tortilla chips. The stated joke of the commercial was that she wanted to make the ad go viral, because she is committed to making the world a better place (through shilling for a product?), and for this noble aim she would employ the sultry voice, the shedding of clothes, whatever it takes.

Check out the video here. Prepare to yell.

The ad certainly got a lot of attention, but it wasn’t the viral message she and Sodastream were hoping to send. What got the world’s attention wasn’t Sodastream’s claims of a more environmentally friendly way to make bubbly sugar water, or even Scarleet Johannson employing the revolutionary idea of a scantily-clad woman pushing a product, but the fact that Sodastream, an Israeli company, makes its products in the Occupied West Bank, in the Mishor Adumim Industrial Zone.

SodaStream was already struggling before this latest gambit. SodaStream shares have declined 40% since October, despite heavy holiday marketing, according to Blomberg. The massive superbowl spend, and teaming up with well known actress Scarlett Johansson, were leveraged to turn around flagging sales.

When SodaStream CEO Daniel Birnaum announced the deal he said he wanted to “demonstrate how easy it is, how sexy it is to make your own soda.”

SodaStream, an Israeli company, has a factory in the Mishor Adumim Industrial Zone, in the occupied West Bank. The factory employees both Palestinians and Israelis, and is touted by the company as a model of cooperation and peace. SodaStream products are stamped with a “Made in Israel” label, despite the fact that they are made in an illegal settlement, using Palestinian land, labor and resources – a direct contravention of international law.

The company is facing increasing pressure from a growing boycott as a part of an international movement to put political and economic pressure on Israel to end the occupation.   The problem with their latest celebrity spokesperson was her very public commitment to human rights. Johannson, until quite recently, served as one of Oxfam’s “global ambassadors.” Oxfam’s public stance on the Occupation was clearly not compatible with Johannson’s role shilling for Sodastream, stating unequivocally that the organization opposes “all trade” from Israeli settlements, claiming they are “illegal and deny Palestinian rights. ”

The Boycott, Divestment, and Sanctions movement organized a massive campaign to highlight the contradiction between serving as a Global Ambassador to an organization opposed to the Occupation and carrying water for a company furthering the very same Occupation. The organizing effort garnered international media attention, and a growing cry for Oxfam to ditch Johannson. The Twitterverse was flooded with tweets urging the org to say #NoScarJo. Folks had some fun with the star’s image. 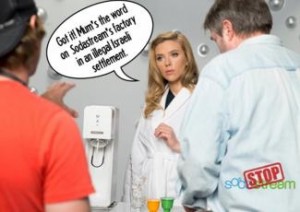 In the days leading up to the Big Game, the choice was clear. Scarlett Johansson could continue as a Global Ambassador for Oxfam, or she could try and sell SodaStream. She couldn’t do both.

So she went with SodaStream. She must really enjoy making her own soda.

The star responded to criticism with a statement outlining her continued commitment to peace.

“I remain a supporter of economic cooperation and social interaction between a democratic Israel and Palestine. SodaStream is a company that is not only committed to the environment but to building a bridge to peace between Israel and Palestine, supporting neighbors working alongside each other, receiving equal pay, equal benefits and equal rights,” said Johansson.

An active campaign and a thoughtful response by Oxfam made it clear that people are watching, and that we don’t buy the company’s line about building peaceful ties between Israeli and Palestinian workers. When the rights of the workers – the right to travel freely, civil liberties are so unequal, those ties can’t nourish true peace.

No amount of PR puffery can cover up that essential truth.