The following is written by Kylie Nealis, longtime friend and former employee of Global Exchange, who recently returned from the Green Cities and Global Exchange New Years research delegation “Sustainability in the Arts, Culture, Architecture and Community Development Projects of Cuba.”

“There are some experiences in life that broaden your perspective and open your mind to new ideas in the best possible ways, and my trip to Cuba for New Years 2014 was one of those experiences. I never could have imagined that I would take in so many new things in just over a week! I learned, saw, heard and did so many new things which I felt I would not have been able to discover on my own without the unique insight that Global Exchange brings. 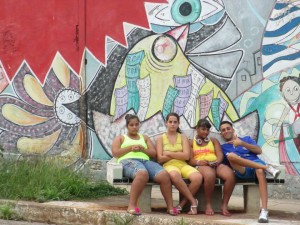 Teenagers in front of a Muraleando mural.

One of the first projects we visited was a community art project called Muraleando. The project began in 2001 when two local artists began teaching art classes to youth in the community. From there it evolved into a community effort to beautify the neighborhood. The first step was to clean up the piles of garbage that existed at the time (the director of the project, Marcos, told us that over 60 trucks of garbage total were hauled out of the community!) Next came the creative part, painting murals on the empty walls in the streets.

Today, artists from around the world come to Muraleando to paint murals with the local artists and over seventy-five children take art classes. After checking out all of the beautiful murals, we got to enjoy a hip hop performance by Marcos and browse the art gallery showcasing the work of artists from the community. Muraleando is an inspiring example of how art can transform, beautify and sustain a community. 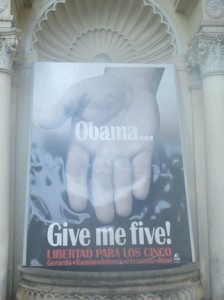 Poster asking for President Obama to return the Cuban Five

The next day, we visited the Cuban Institute for Friendship with the Peoples (ICAP). Formed in 1960, ICAP’s mission is to form new ties and friendships with people in other countries. We learned a lot in the hour and a half conversation we had with a representative from ICAP but most interesting was the case of the Cuban Five.

It’s a long and involved case of five Cuban men imprisoned in the U.S. while they were infiltrating U.S.-based groups plotting terrorist attacks in Cuba. It’s well documented that in the mid 1990’s there were several of these groups active in Miami, with the intent of destabilizing Cuban society and overthrowing the socialist government. All five of the Cuban men were arrested and charged with conspiracy to commit espionage in the U.S. and have been imprisoned since, with sentences from 15 years to life. We also learned about the global movement to pressure the US government to release the so-called Cuban Five (one of whom has been released). It was inspiring to learn about the vast solidarity, both internationally and in Cuba, that exists for the Cuban Five. 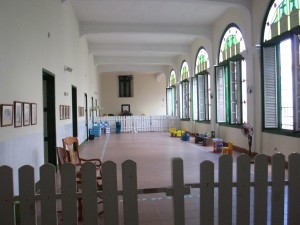 We also visited a community development project called Convento de Belen, a Third Age facility, childcare center and architectural restoration site all in one. The state-sponsored facility provides free childcare to families while at the same time providing grandparents a place to gather during the day while their families are at work. Being under the same roof, the children and the elderly have opportunities to interact with each other throughout the day. The facility had toys and books for the children as well as dominoes, other games and physical fitness equipment for the elderly.

Visiting Convento de Belen really made me think of how the US could benefit from following Cuba’s example. Here at home, services such as child and elderly care tend to cost families a lot of money. In Cuba, there is a lot of importance placed on family and community and I saw these values echoed in the social facilities and community cultural centers we visited. 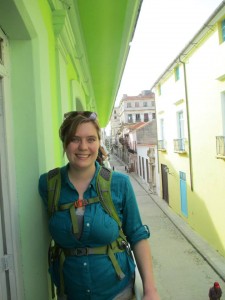 I’ve been home from Cuba two weeks now and I’m still contemplating the experience. Before visiting Cuba, I had my own assumptions about what life is like for the Cuban people and how things function under a socialist system. After visiting, I not only feel more informed on many aspects of Cuban culture and society but I also have a new admiration for how resilient and resourceful Cuba and its people have been despite decades of the U.S. blockade.watch full San Andreas 2015 movie online

In Cuba, I felt a kind of radiance coming from the art, the music, the architecture but most of all, from the people. I hope to hold onto that radiant feeling in my own life here at home and share my new perspectives with others who are curious about the beautiful, bright island nation just 90 miles away from U.S. shores.”

Thanks Kylie for sharing your story with us!