The following post is written by Reality Tours communications intern William Jones Jr as he explores Afro-Venezuelan identity historically and in its current context. Visit Venezuela on a Reality Tour to learn more about the struggles, contributions, and successes of Afro-Venezuelans.

Under the leadership of the late President Hugo Chávez, Venezuela has made strides toward combating the historical legacy of racism and recognizing the national importance of African heritage, promoting social inclusion and respect for Afro-Venezuelans. Among them is the official celebration of the Month of Africa in May and Day of Afro-Venezuelans on May 10. 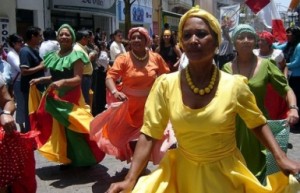 Although Abolition occurred in 1854, freedom did not bring equality. Venezuela, like many other Latin American countries, used the idea of the mestizo born of European, Indigenous, and African blood, to uphold a myth of racial democracy that denied rampant discrimination on the basis of skin color and African identity on paper.  In reality African cultural traditions remained marginalized and European traditions were promoted. Blacks remained at the bottom of the economic and social hierarchy.

Since the election of late Hugo Chávez, conditions for Afro-Venezuelans have improved vastly. Once a privilege enjoyed by only a few, education is now considered a human right. Afro-Venezuelans are partaking in education at unprecedented rates, an education that has an intercultural emphasis and includes their historical contributions. Massive literacy campaigns and new educational institutions have allowed more than 1.5 million adults to learn to read and write, or to return to school.

With the 1999 Constitution, Venezuela became the second Latin American country after Cuba to guarantee all citizens the right to basic healthcare. To meet this goal, a partnership was initiated with the government of Cuba in 2003, which provided 20,000 medical professionals to treat previously underserved Venezuelans. Thousands of community health clinics have been established throughout the country, which has directly benefited Afro-Venezuelans. Since 2003, millions of Afro-Venezuelans have been issued national ID cards guaranteeing them the citizenship rights they previously lacked. Electoral participation among Afro-Venezuelans has grown exponentially. Social missions addressing poverty and inequality have resulted in a great rise in the standard of living for Afro-Venezuelans.

Celebrating and Connecting with African and African Diaspora Heritage

Venezuela has prioritized its relations with Africa by opening 18 new embassies in countries including Mali, Morocco, Congo, and Angola. The Second Africa-South American Summit was held in Venezuela on Margarita Island on the Caribbean from Sept. 26-27, 2009, where Chavez quoted “Africa will be an important geographic, economic and social pole. And South America will be too.”

Transnational alliances and movement building has occurred between African Americans and Afro-Venezuelans involving organizations such as the Rainbow Push Coalition, TransAfrica Forum, the NAACP and the Organization of Africans in the Americas. Prominent social activists include Cornel West, Julianne Malveaux, Danny Glover, Harry Belafonte and Bill Fletcher. They are just a few of the many U.S.-based organizations and activists working to build bridges to Afro-Latin America.

Visit Venezuela on a Reality Tour