A is for Activist Children’s Book: From Self-Published to Award Winning Publication 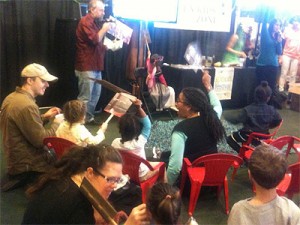 About this time last year, I asked children’s book author/illustrator and longtime Global Exchange ally Innosanto (Inno) Nagara about the inspiration behind his book A is for Activist.

The self-published A-B-C board book for progressive and activist families was set to make its debut at the San Francisco Green Festival.

Since the launch of A is for Activist last year, a lot has happened.So I connected with Inno once again for an update and to learn what he has planned next. Here’s what he had to share: 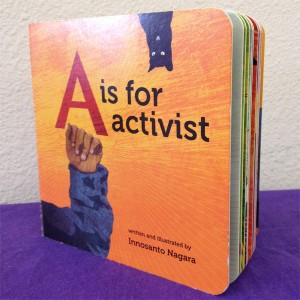 So much has happened since last November! When I first started A is for Activist, I was just keen to do something fun for me and my son, who was just reaching board-book age. Then as I’d mentioned, I heard from other friends that they wanted copies, so I decided to take the leap and self-publish it.

Thanks to the Global Exchange family and other enthusiastic networks, the word got out. Against convention, despite not having a real distributor, A is for Activist was carried in many of the most venerable independent book stores around the country and even won the 2013 Horace Mann Upstander New Talent Award.

I shipped copies to almost every state in the US, as well as Canada, Europe, New Zealand, South Africa, South America, and even Palestine! And in under a year A is for Activist sold out. 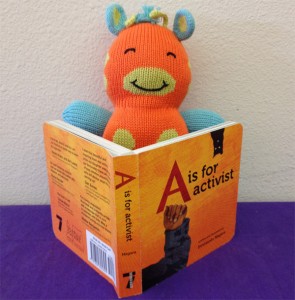 But not for long! Seven Stories Press/Triangle Square heard about the book, and offered to take over publishing it. This was a match made in heaven. They publish What Makes a Baby by Cory Silverberg, and 10,000 Dresses by Marcus Ewert, as well as numerous other important adult books Global Exchange members will recognize (Chomsky, Walker, Zinn, Takaki, etc.). So now the book is properly distributed, it is available, as they say “where books are sold” in the US and internationally.

But one of the most exciting developments for me is that there is a Spanish adaptation coming out called A de Activista. I’ve been greatly honored to work with Martha Gonzalez, the lead singer/songwriter from the group Quetzal. For those unfamiliar with them, they won a Grammy Award for Best Latin Rock, Urban or Alternative Album this year.  Their blend of music and politics deserves it’s own review here, but suffice it to say, she was the perfect fit to take on this challenging project.

An alphabet format book like A is for Activist does not simply “translate” into another language like Spanish. But Martha was able to take the idea and the illustrations, and write her own adaptation that has garnered nothing but enthusiastic reviews from all who have seen it. But more on that later. Due to the nature of the publishing business, that one won’t be out until later next year. I’ll be looking forward to sharing more about it then.

For now, I just want to extend a special thanks to my Global Exchange family–as you have been instrumental in helping A is for Activist become a reality!

No thanks necessary Inno! Global Exchange believes young people are instrumental in creating a peaceful future, so A is for Activist is right up our alley! 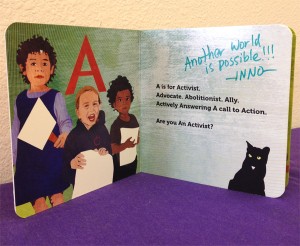 Signed copy of “A is for Activist”

So much so, that we’ve decided to give A is for Activist away as part of our end-of-year membership drive: