There Is No Planet B: Update on Rights of Nature at the United Nations

Guest post by Linda Sheehan of the Earth Law Center.

In celebration of “International Mother Earth Day” in April, the United Nations General Assembly held an Interactive Dialogue on Harmony with Nature in New York.  The Dialogue arose in part out of language in the final UN Outcome Document from the 2012 Conference on Sustainable Development (“Rio +20”), which acknowledged the growing rights of nature movement and called for alternatives to Gross Domestic Product as measurements of “progress.”  In line with Rio +20, the April UN Dialogue examined how to achieve a “more ethical relationship” with the natural world through alternative economic systems that enhance the well-being of people and planet.  I was fortunate to be able to participate as part of a panel of international speakers, and addressed the significance of the rights of nature, a point echoed by UN Secretary-General Ban Ki-moon in his remarks. 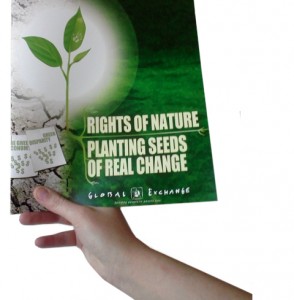 Given that the UN will be taking up these issues in a new “High-Level Political Forum” in September, a few points bear highlighting now.  The root of “economics” is from the Greek for managing our home.  By all accounts, we have not been managing our home well.  Scientists estimate that because of our actions, the rate of extinction is now 1,000 times the average across history.  Even the World Bank is now reporting that our current climate change path will create a “transition of the Earth’s ecosystems into a state unknown in human experience.”

There is no Planet B.  We cannot separate what we do to the Earth from what we do to ourselves.  Yet, every element of our current, neoliberal economic system is intertwined with the idea that the natural world is property. We trivialize the fullness of life and diversity of natural world by labeling its elements “resources,” so they better fit within our neoliberal economic model.  Workers, or “human resources,” are similarly treated as a cost to business, not a benefit to society.  Our economic system is feeding itself with our collective well-being, and we must find an alternative.

To use a fashionable UN phrase, is “sustainable development” our end goal?  Or should we be aiming for sustainable (or better yet, “thriving”) communities of humans and ecosystems flourishing together?  Both types of communities are intimately connected, and both must be served by – not serve – the economy.

What kind of economic system serves the goal of thriving communities?  Adam Smith, credited with neoclassical economic theories that evolved into the destructive neoliberal system driving the planet to ruin today, provides important and generally-overlooked insights.  Smith wrote in his Theory of Moral Sentiments that the “chief part of human happiness arises from the consciousness of being beloved” – by those closest to us, and within our larger communities.  Smith believed that “wise and virtuous” person was “at all times willing that his own private interest should be sacrificed to the public interest” – contrary to the motive of individual wealth maximization that drives economics today.  In fact, Smith firmly believed that “[t]he rate of profit … is always highest in the countries which are going fastest to ruin.”  This is borne out by our misguided use of GDP as an indicator of well-being, rather than recognizing that GDP grows with the expansion of harmful goods and actions.

The ethical qualities that create happy, prosperous homes and communities – love, cooperation, friendship, duty – both arise from and create strong relationships.  We have discarded these ethics, however, in favor of an economic system premised on separation and greed.  We can do better.

An essential element of this shift in perspective is realizing that relationships can flourish only if we recognize the inherent rights of their participants.  As we came over time to acknowledge the rights of people who were formerly treated as property, we began to have full, thriving relationships with them, which benefitted all.  These lessons extend to the natural world.

When the UN was drafting the Universal Declaration of Human Rights, the drafting committee observed that “the supreme value of the human person…did not originate in the decision of a worldly power, but rather in the fact of existing.”  So too do the rights and value of the natural world arise from existence.  We are first and foremost Earth citizens, and we must recognize the rights of ecosystems and species to exist and thrive if we are to flourish ourselves.

Acknowledgement of the rights of nature is a movement that is spreading throughout the world.  Ecuador recognized these rights in its Constitution in 2008, stating that nature “has the right to exist, persist, maintain itself and regenerate.”  Under the Constitution, “[a]ny person” may “demand the observance of the rights of the natural environment before public bodies,” including rights to be “completely restored.”  Bolivia has passed two sets of laws on rights of Mother Earth, and New Zealand recognized the rights of the Whanganui River and its tributaries last summer. 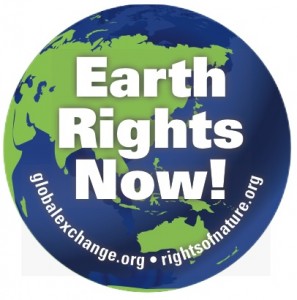 Recognition of the rights of nature is essential to help us build closer relationships with the environment that guide our actions to care for it.  But we also must specifically reject the current neoliberal economic system and replace it with alternatives such as ecological economics, which recognizes that the economy is a subset of an overarching natural world, rather than the reverse.  For example, roughly three dozen communities across the U.S. have passed local laws that both recognize the rights of nature and reject the rights of corporations over the rights of local community members to live in harmony with each other and their environment.  These laws support a community’s right to nurture its home, rather than witness its destruction.   The largest city to adopt such an ordinance is Pittsburgh, Pennsylvania, and the first West Coast city to take up this effort is Santa Monica, California, which adopted their “Sustainability Rights Ordinance” in April.

The goal of the UN’s new “high-level political forum” (HLPF) is to keep “sustainable development” high on national agendas. The first HLPF meeting will be September 24th in New York City, as the 68th Session of the UN General Assembly begins, and will address sustainable development goals that can be advanced worldwide.  Earth Law Center and other Major Groups will attend to reinforce the message that such initiatives must serve sustainable communities, rather than solely development or the neoliberal economic model that advances unsustainable development.  We must embrace actions commensurate with the sweep and importance of the challenges before us, and so must advance an economic system that guides us to fully care for each other, our communities, and the Earth as a whole, one that recognizes the rights of the natural world to thrive, and for us to prosper with it.

For more information on the UN International Mother Earth Day Dialogue, see the Harmony with Nature website, the U.N. Summary of the Dialogue, the U.N. Press release and the videos of the presentations.

Linda Sheehan is the Executive Director of the Earth Law Center, with over 20 years of environmental law and policy experience. She holds a B.S. in Chemical Engineering with a Concentration in Economics from the Massachusetts Institute of Technology; an M.P.P. from the University of California, Berkeley’s Goldman School of Public Policy, where she was named a Berkeley Policy Fellow; and a J.D. from the University of California’s Boalt Hall School of Law. She is a Research Affiliate with the Centre for Global Studies at the University of Victoria, British Columbia, and is a member of the Commission on Environmental Law in the International Union for Conservation of Nature (IUCN). Ms. Sheehan is also Summer Faculty at Vermont Law School, where she teaches Earth Law. She is a contributing author to Exploring Wild Law: The Philosophy of Earth Jurisprudence, published by Wakefield Press in 2011; Wild Law in Practice, to be published by Routledge in 2013; and Rule of Law for Nature, to be published by Cambridge University Press in 2013.