Peace, Democracy and Human Rights, People to People Blog, What About Peace Contest

A New Holiday for Peace 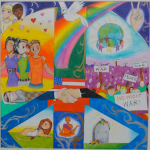 On August 27th in 1928, nations of the world sent representatives to Paris, France to sign a treaty banning war and committing to the peaceful settlement of all disputes. The treaty is still listed as in force on the U.S. State Department website! (open the document, scroll to page 454)

The event is almost forgotten and the treaty has certainly not been honored but more cities are thinking about creating a new holiday to remember the day and a new generation of youth are ready to take up the call to think about peace.

On Wednesday, August 21, a resolution was introduced and voted on by the St. Paul City Council in celebration of the 85th anniversary of the signing and a petition has been set up to urge more cities to recognize the treaty and sign onto the Peace Pact Holiday action. St. Paul is leading the way; but your town can join them and use the What about Peace? contest as a way to mark the celebrations and bring more youth to the table.

Are you a teacher?  Do you work with young people ages 14 -20?  Are you a young creative person yourself?  It’s time to get started. The What About Peace? contest will officially re-open for the 2014 contest on Sept 15th with six categories in visual and written arts and cash prizes.

With seven years of art, poetry and essays from around the world, we’ve decided it is time to expand the visibility of the contest. 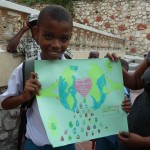 This summer Global Exchange has hosted an intern to curate a new exhibition of What About Peace art! Mariana, a junior year from Wheelock College in Boston, Massachusetts with double major in Juvenile Justice Youth Advocacy and Political Science/Global Studies as well as a minor in Visual Arts, sorted and organized all of the beautiful What About Peace contributions and curated a show that can be sent for display to schools, community groups and events. Let us know if you’d like to show the work. Email Kirsten (at) GlobalExchange (dot) org.

Our first exhibit will be this weekend at the Golden Gate Park in San Francisco for their first Peace in the Park festival which will bring together the diverse San Francisco and surrounding communities for a rejuvenating day of peaceful activities for all ages and backgrounds. 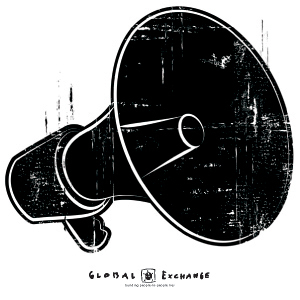