Global Exchange is constantly building partnerships with other organizations that are “fighting the good fight.” This past weekend, Global Exchange interns, staff members, and friends participated in another campaign to help promote Fair Trade… and have some fun. This post was written by Summer Intern Bryan Weiner. 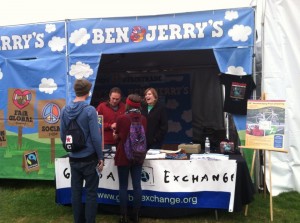 On Friday, Saturday, and Sunday a stalwart group of Global Exchange volunteers braved the fog and headed out to Golden Gate Park to partner with Ben and Jerry’s during the Outside Lands Music Festival.

I headed out with the group on Sunday, not knowing what to expect, but having heard good reports from the previous two days I was excited to work with a group of people who were passionate about Fair Trade, good music, and ice cream.

The campaign was called “Thumbs-Up for Fair Trade” and the socially conscious Vermont ice cream company was urging people to “not just stand there but do thumb-thing” about promoting Fair Trade. People lined up at the booth, stamped their thumbs on ink-pads in 12 different colors, and put their thumbprint on a giant poster board at the back of the tent. This board will be displayed at an art walk in Burlington, Vermont. After making their thumb-print, they got to go and get a generous sample of Ben and Jerry’s Greek Frozen Yogurt, receive a lot of free “schwag” and get some information about the importance of buying Fair Trade products. 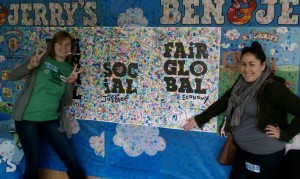 We arrived a little after 2 in the afternoon under bleak, gray skies with cold temperatures in the low 50s. I was skeptical as to whether people would actually want ice cream in this weather, but when I arrived at the tent, my skepticism quickly vanished. People were lined up hundreds-deep to give their thumb-print, cheer Fair Trade, and get some yummy fro-yo.

Our task was basically going to be to cheer people on and get them pumped about supporting Fair Trade, something that comes naturally to any of us involved with Global Exchange. We interacted with customers, handed out stickers, explained the difference between Fair Trade and free trade, and I even got silly and allowed excited concert-goers to put thumb-prints all over my face. Over 15,000 scoops of frozen yogurt were served over the course of the entire weekend! 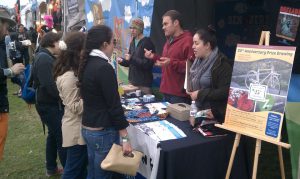 After the frozen yogurt ran out on Sunday afternoon, we quickly helped Ben and Jerry’s break down and then set up our Global Exchange table. We got large crowds of people coming over to our table (admittedly some because the Ben and Jerry’s banner was still up) to hear about our organization and spin our prize wheel with questions.

Despite the setting, we were able to have many meaningful interactions with people who were genuinely interested in our work, but who had very little previous knowledge about our issues. Our team of four educated people on the dangers of the TPP (The Trans-Pacific Partnership), the Keystone XL pipeline, fracking, and why it is important to support Fair Trade.

At 8:00 when we packed up, everyone was very satisfied with our afternoon’s work. We made some great ties with the progressive team from Ben and Jerry’s, opened a lot of eyes, and even got to sample some of the fantastic frozen yogurt. And, we still had a chance to see the headlining acts of Outside Lands after our volunteer work. It was my first time seeing the classic band the Red Hot Chili Peppers and a great conclusion to a wonderful day and weekend.