The Bay Area Turns Up the Heat! 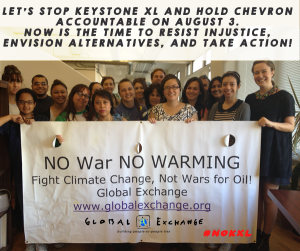 As the temperature rises, so do we.

That is the tagline behind the Summer Heat actions taking place all over the country to challenge the fossil fuel industry. From the Pacific Northwest, to Texas, to Maine and many more in between, people are ready to fight against the industry that is wrecking our planet and our future.

Here in California, people of the Bay Area will rise up at the Chevron refinery in Richmond, CA on August 3rd. Just days before the one year anniversary of the Chevron Refinery explosion, we’ll join the Summer Heat Richmond coalition and say No to Chevron, No to Tar Sands Oil, Stop Climate Chaos and Yes to Green Energy.

August 3 will also mark just three months since Global Exchange honored the work of First Nations activist Crystal Lameman, for her work to stop the further expansion of tar sands into the traditional territory of the Beaver Lake Cree. It will also mark one month since I started my journey to Fort McMurray to participate in the Healing Walk – an annual First Nation and Metis event to focus on healing the environment and the people who are suffering from tar sands expansion.

It’s now time to turn local. Gathering at the Richmond BART station at 10AM, we’ll march to the entrance of the refinery and once we reach the gates with a children’s brigade at the lead, we’ll rally and hear from Richmond Mayor Gayle McLaughlin and climate champion Bill McKibben. The children’s brigade will start a little later (10:30AM), and meet at George Carroll (aka Washington) Park, Pt Richmond. 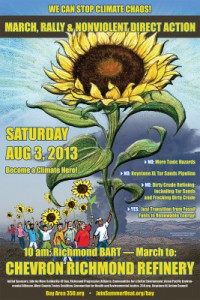 RSVP and march with us to call for:

Putting together an action like this is a massive undertaking and brings together over 50 local and national organizations: the Richmond Progressive Alliance, Communities for a Better Environment, the Asian Pacific Environmental Network, the California Nurses Association and many local unions, as well as national environmental networks and social justice organizations. So much to do! There are still lots of volunteer opportunities.

After the rally, affinity groups will carry out nonviolent direct actions, some involving sunflowers – known for their ability to absorb heavy metals from the soil.  If you want to be part of these or develop your own creative, nonviolent actions, please attend a nonviolence training on Sunday July 28.  These actions will be carried out peacefully and carefully separate from those who cannot or do not wish to risk arrest.

Hope to see you there!

For Summer Actions across the country, visit JoinSummerHeat.org.