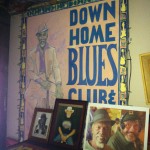 The Down Home Blues Club, childhood home of legendary blues guitarist D.C. Minner in Rentiesville, OK – one of Oklahoma’s many historic All-Black Townships.

The following guest post is Part V in a series written by Rachel Jackson who is Global Exchange’s ‘Radical Oklahoma’ Reality Tours Trip Leader, which is happening now.

From Tulsa, we headed to Rentiesville to visit the Down Home Blues Club and visit with Selby Minner. Generations ago, family members ran a thriving business out of the home selling corn whiskey and Choc beer (a type of beer attributed to the Choctaw). Today, the same home is now the site of the Down Home Blues Club and a yearly festival. We were honored by an impromptu performance by Selby, a couple of her students, and her new partner Dan “Oklahoma Slim” Ortiz. 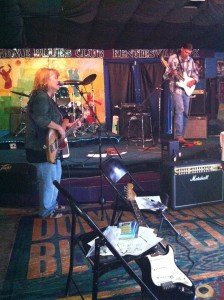 Selby Minner sings her heart out for GX Tour Participants. Dan “Oklahoma Slim” Ortiz tears it up on the guitar in the background.

Just outside of Rentiesville sits the site of the historic Battle of Honey Springs, an 1863 Civil War battle in Indian Territory.  What makes this battle so radical is that it was the first battle of the Civil War in which African Americans fought.  The First Kansas Colored Infantry fought for the Union army alongside the First, Second, and Third Indian Home Guards.  Native and African Americans fought together against the Confederacy for their own freedom and autonomy.

Our day did not end there.  We continued from Rentiesville to Okemah for the first night of the 2013 Woody Guthrie Festival.  A gentle storm rolled over eastern Oklahoma as we drove, and brought the temperature down considerably.  We spent a relaxing and enjoyable evening in the Pastures of Plenty, all freshly mowed and spreading out under the Oklahoma nightsky, swaying to the music of Ramsey Midwood, the Red Dirt Rangers, and Butch Hancock. 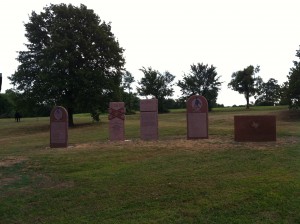 Memorials commemorating the participating military units of both the Union and Confederate armies in the Battle of Honey Springs, the pivotal, historical Civil War Battle in Indian Territory.

It was a proper kick-off to an event that over the course of 16 years has become a microcosm of all that’s good and right in Oklahoma.  And the party’s just getting started.