The following guest post is Part IV in a series written by Rachel Jackson who is Global Exchange’s ‘Radical Oklahoma’ Reality Tours Trip Leader, which is happening now.

The last two days we’ve been living on Tulsa time. Today we rolled into the Brady Arts District where the brand new Woody Guthrie Center is located.  The Center is an interesting collection of biographical information, historical & geographical context, archival material, commentary on Woody’s life and work, and – of course – Woody’s music.  The crowning jewel of the Woody Guthrie Center is his archives, purchased from the Guthrie family by the George Kaiser Family Foundation of Tulsa. 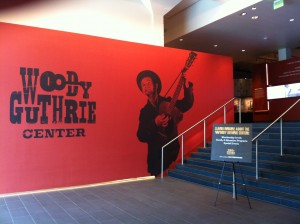 The entry way to the Woody Guthrie Center in Tulsa, OK.

Unfortunately, there is some local controversy surrounding the Woody Guthrie Center’s location in the Brady Arts District.  The arts district itself is a hip area of Tulsa that has been recently developed and is home to a wide variety of restaurants, bars, art galleries and coops, concert space, and museums.  The trouble is, it’s named after Tate Brady, a “founder” of Tulsa who happened also to be a leader of the local Klan.  What an irony that the Woody Guthrie Center, built in honor of a man who spent his life dedicated to unionism and civil rights, should have an address on Brady Street.  Here’s the good news: there is a strong coalition of determined folks urging the Tulsa City Council to get the name changed. 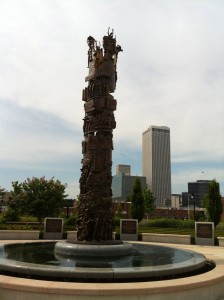 The Tower of Reconciliation by artist Ed Dwight.

Adding fuel to the fire is that part of the Brady Arts District is located within the boundaries of the historic Greenwood District, a thriving African American portion of the city proudly built while Jim Crow still reigned supreme.  The Greenwood District was utterly decimated in the 1921 Tulsa Race Riot, referred to by Greenwood residents who lived through it as the Race War.  It was a massacre.  Tate Brady was front and center as racist whites organized into militias, killing many hundreds of African Americans, looting property, and burning homes and businesses to the ground.  It’s a shameful, painful part of Tulsa’s past.

Thursday’s tour stops were devoted to understanding Oklahoma’s African American history, the Greenwood District and All Black Townships, the 1921 Race War, and the state and city’s efforts at reconciliation.  We started in the morning with a stop at Reconciliation Park, located in the Greenwood District, just a few blocks north of Brady Street and the Woody Guthrie Center.  In the midst of the ugly facts of the 1921 Race War, this patch of earth offers reassurance that humanity can confront its mistakes, admit painful truths, and move forward having learned from them.  The park is a result of the Oklahoma legislature’s Tulsa Race Riot Commission findings, and the hard work of many committed politicians, historians, activists, and artists. 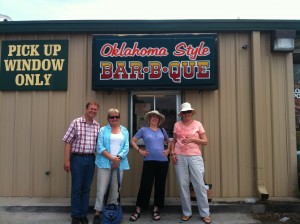 Much of the work uncovering the truth about the “Tulsa Race Riot,” is inspired by the life and work of pioneering African American historian, Dr. John Hope Franklin. We were fortunate enough to get to visit with Jef Kos, the Secretary of the Board for the John Hope Franklin Center for Reconciliation, and former student of Dr. Franklin’s.  After our time in the park, he accompanied us on a leisurely tour through the Greenwood Cultural Center, and then to lunch at Dr. Franklin’s favorite barbeque joint in North Tulsa – Oklahoma Style BBQ.  Yum.