The following guest post is Part III in a series written by Rachel Jackson who is Global Exchange’s ‘Radical Oklahoma’ Reality Tours Trip Leader, which is happening now 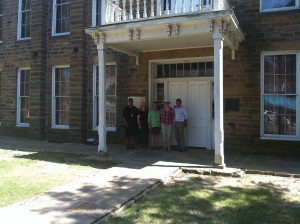 After a full morning, we met the Muscogee Nation Museums Director and Assistant Director at the Creek Council House in the heart of Okmulgee.  The Council House was built in 1878 by Creek hands and served as the site of tribal government until the federal government abolished it during the allotment period and took the building from the Muscogee Nation, deeding it the City of Okmulgee, in 1919.

Justin and Josh – both Muscogee Nation citizens, trained anthropologists, and former interns with the Smithsonian Institute’s National Museum of the American Indian – were fantastic conversationalists.   They are both clearly pumped about their role in restoring the Council House to its former, original glory.  The building was finally returned to the Muscogee Nation through purchase from the city in 2010.  Talking to these young men, it’s obvious the resistance continues.

We ended our day at the Muscogee Nation Tribal Complex, where tribal government (finally reinstituted in 1971) and associated departments and offices are located.  William Lowe and Brian Underhill of the Muscogee Nation Tourism Department led us through the Muscogee Veterans Museum and the central administration building. 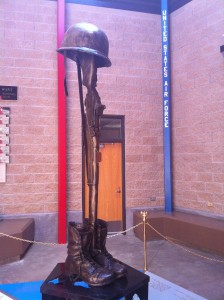 The Veterans Museum is a fantastic tribute to Muscogee veteran’s participation in all U.S. wars, including a well-designed tribute to the fallen among them.  It is also the only tribal veteran museum of its scope in Oklahoma.  Muscogee Creeks, as our day taught us, have always been fierce fighters.

After dinner, we wound our way back through the Cookson Hills, wondering at the impact this expansive tribal history and culture must have had on Woody Guthrie as he grew up in Okemah, not too far away.  And as the hot sun set behind us, we knew it would never set on the proud tradition of resistance and cultural continuance in the Muscogee Nation of Oklahoma.