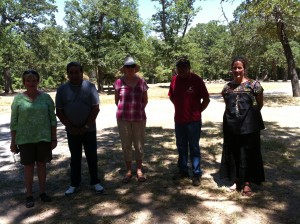 The following guest post is Part II in a series written by Rachel Jackson who is Global Exchange’s ‘Radical Oklahoma’ Reality Tours Trip Leader, which is happening now.

Yesterday was a full day, rich with questions, conversations, and revelations, all the more intensified by the increasing summer heat.  Today we hit the road early to drive through the Cookson Hills, home to numerous historic Cherokee communities.

In these hills stands the cabin of Sequoyah, the inventor of the Cherokee syllabary that enabled a nation of people to become fully literate within a decade.  They have also been the hideouts for many an outlaw, including the notorious Belle Starr and Pretty Boy Floyd. Folk heroes abound in these parts.

We first stopped at Hickory Grounds, Oce Vpofa (pronounced O-je Uh-bo-vuh in the Muscogee language).  Hickory Grounds is unspeakably sacred to the Muscogee Nation.  It was the last ceremonial grounds to leave Alabama when the Creeks were removed on the Trail of Tears in the 1830s. We learned about the history and ongoing struggle to protect this important land.

Hickory Grounds was the site of the 1909 Crazy Snake Rebellion, a complicated series of events that resulted from many years of Muscogee resistance to land allotment. In order to open Oklahoma up for settlement and statehood, the federal government had to accomplish two things: 1.) abolish tribal governments and jurisdiction, and 2.) divide tribal land held in communal tenure into individual holdings.  The Dawes Act of 1887 and the Curtis Act of 1898 accomplished these two goals.  Chitto Harjo, leader of the so-called Crazy Snakes, resisted the process of allotment via multiple means across almost two decades.

In 1909, a lynching of a man in Henryetta prompted many African American men and boys to flee.  They sought refuge at Hickory Grounds, where they erected tents and lived outside of town for many months.  Local racists could only abide the perceived threat of this situation for so long.  They raided the grounds, instigating a fire fight with these men and boys, and came after members of the Snakes at their homes as well.  Chitto Harjo was wounded but managed to escape into the Kiamichi mountains where he died two years later.

Today the Mekko at Hickory Ground, George Thompson, faces a new resistance struggle.  His position as Mekko (translated as “king,” but understood as “chief”) makes him responsible for the ceremonies that occur at the ground.  Though the details of his ceremonial knowledge and duties are deeply private, Mr. Thompson maintains the fire at Hickory Grounds.  He is only the fourth Mekko at Hickory Grounds since it was removed to Oklahoma in the 1830s, and he acts on behalf of not only current members of the grounds but also on behalf of ancestors long associated with the grounds, including past Mekkos.

Currently the Poarch Band Creeks in Alabama, a group that managed to gain federal recognition in the 1980’s by establishing descendancy from the Muscogee Nation, is actively desecrating the former site of Hickory Grounds in Wetumka, Alabama.

In order to build a casino complex, they have dug up the remains of seven former Mekkos and approximately 60 others, including the bodies of women and children, along with ceremonial objects associated with the burial.  This is an ethically reprehensible act on the part of a group that promised to protect the former grounds as a condition of their federal recognition.  Perhaps worse, in Muscogee tradition, the removal of these remains disrupts ceremonies associated with the grounds today.

We were honored by the chance to talk with George Thompson and his brother Tim about the history of Hickory Grounds, some of the practices of the grounds, and the current struggle with the tribal government of the Poarch Band Creeks.  Read more at http://savehickoryground.org. Be sure to check out the resources page where you can view an excellent short film on indiegogo and read a statement from Mekko George Thompson.