Travelers Explore the Radical Side of Oklahoma’s History 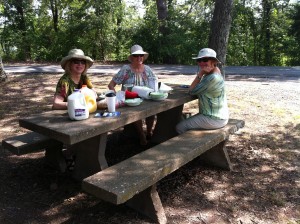 Tour participants eat a healthy breakfast in the shade. 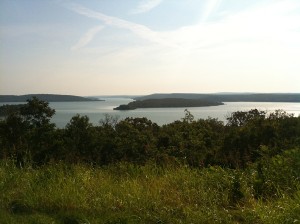 On Sunday, after a quick round up in Tulsa of our tour guests and a mad supermarket dash for breakfast supplies, we headed to Lake Tenkiller State Park.

On the way we crossed the boundary between Muscogee Creek Country into Cherokee Country, where the lake is located. We arrived in time for dinner at Soda Steve’s, a local establishment that makes it own root beer and cream soda.

This morning on Day 2, we woke up in a leisurely fashion to sunrise over Lake Tenkiller and enjoyed a picnic breakfast at a table outside our cabin. We got on the road mid-morning and took the back roads scenic route across OK Highway 9 west toward Sasakwa. 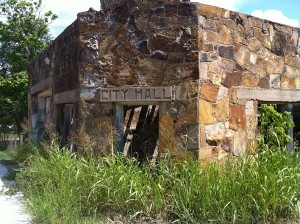 This is the remains of the old city hall in Sasakwa City Hall. Perhaps some Green Corn rebels were detained here.

Our goal was to tour the countryside around the site of the Green Corn Rebellion. Our trip took us out of Cherokee territory, through Muscogee Creek Country, and into the Seminole Nation – three of the five tribes removed from the southeastern United States into Indian Territory during the 1830’s removal era. The federal government assigned these tribes (the first among many more) a new, and much smaller, land base that these nations still claim today.

The Green Corn Rebellion was an armed insurrection that occurred in early August 1917. Occurring in reaction to the World War I Conscription Act, its goal was to protest the draft of the poor to fight in “a rich man’s war.” 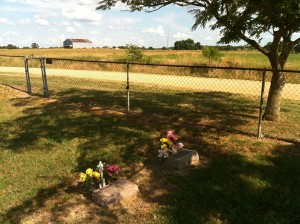 The rebels involved were members and sympathizers with the Working Class Union, a loosely affiliated branch of the Industrial Workers of the World that organized African American, Native American, and white tenant farmers, sharecroppers, miners, and oil field workers who saw class concerns as a unifying force.

In the days prior to rebellion, the rebels committed numerous acts of sabotage such as dynamiting railroad trestles and cutting telegraph lines to halt the mechanisms of capitalism that were driving U.S. involvement in the war. Though the story is complicated, the plan was to continue such acts of sabotage all the way to Washington, D.C., meeting up with other rebels across the country along the way.

The rebels, however, never made it out of the area. They were stopped by posses made up of their neighbors and community members. Knowing they couldn’t shoot men they knew (they were prepared to shoot nameless National Guardsmen), the rebels laid down their arms and gave themselves up for arrest. According to historic records, all in all 458 men were arrested, many of whom went on to serve significant sentences. The key leaders of the WCU were sentenced to ten years in Leavenworth federal penitentiary.

While the Green Corn rebels were suppressed through accusations of disloyalty and syndicalism, so was the rebellion. That is, few Oklahomans know of it because official narratives of state history do not account for it. It’s hard not to wonder how Oklahoma might be different if this story were publicly acknowledged, or perhaps even heralded, as a collective expression of conscientious objection to unbridled greed and war. 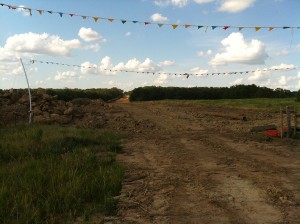 What might a roadside historical marker say about these rebels, impoverished workers in the Oklahoma countryside, who emboldened each other to take a stand?

On the way back to Tenkiller, we took a slightly different route, and came across – quite by accident – the path being cut across Oklahoma for the Keystone XL Pipeline. Certainly the Green Corn Rebels should inspire us all to put a stop to that mess.