From the U.S. to Cuba: LGBT Rights and Freedoms

The following post is written by Reality Tours Summer Intern Bryan Weiner. Bryan traveled to Cuba with Global Exchange and the Monterey Institute of International Studies for a graduate studies class. 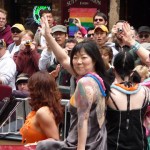 Last week was marked by landmark Lesbian, Gay, Bisexual and Transgender (LGBT) rights decisions by the Supreme Court of the United States. These decisions have been celebrated around the United States during the gay pride marches that typically occur in the month of June. But what is the state of the LGBT rights movement in the rest of the world? Through a Global Exchange Reality Tour to Cuba with the Monterey Institute of International Studies, I had the unique opportunity to look at the complicated situation of gay rights in this complex Caribbean nation. 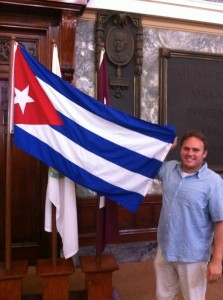 When I was preparing for my trip to Cuba, I heard many different, contrasting viewpoints on the status of the LGBT community, which seemed to fall in line with the very diverse opinions that I heard about every other segment of Cuban society after the Revolution. Many, both within and outside of Cuba, have held up the LGBT movement in Cuba as an example for the rest of Latin America to follow, while others have claimed that homosexuals are still facing extreme levels of discrimination and abuse. I knew that, like everything else that I had heard and read about Cuba, the truth of the matter probably fell somewhere in the middle of the highly polemical rhetoric.

The persecution of homosexuals began immediately after the Revolution and lasted for a number of decades. The revolution came in to restore the dignity of the Cuban population, including the excesses they were subjected to from brash Americans coming down to the island looking for a good time often in gambling casinos and houses of prostitution.  Gay and lesbian people were seen as tied to loose morals and the anti-revolutionary spirit of this period prompting an immediate crackdown on this community by the Castro regime. Many Cuban homosexuals were sent to re-education camps, in a period that was described in detail by famous gay Cuban exile author, Reinaldo Arenas in his groundbreaking work, Before Night Falls. This period however, was also a time where homosexuals all over the world, including in the United States, were experiencing active persecution on the basis of their sexual identity. As attitudes began changing around the world, they did so in Cuba as well.

Homosexuality was officially decriminalized in Cuba in 1979 and gay liberation attitudes started to emerge in the 1980s. This began the process that was to end with Cuba being one of the countries at the forefront of the LGBT rights movement in Latin America. One of the most significant advances was the 1993 release of the extremely popular movie, Fresa y Chocolate. This movie dealt with the relationship between a gay Cuban and a straight young revolutionary. While its take on homosexuality seems dated when looked at from a modern perspective, it was historical not only because the socialist Cuban government allowed its production, but because the film argued that the LGBT community was an important part of revolutionary Cuban society.

Now, Fidel Castro has officially apologized for the abuses that the LGBT population faced during the early decades of the Revolution and there is an active gay community and LGBT rights movement on the island. Cuba signed on to the historic 2011 United Nations Resolution calling for the declaration that LGBT rights are human rights. The most well-known leader of the Cuban LGBT movement is Mariela Castro, the daughter of President Raúl Castro and niece of Fidel Castro. She  is also the director of CENESEX (Centro Nacional de Educación Sexual). She has been a gay rights activist who has received awards and acclaim in Cuba as well as in the international community. Among her notable accomplishments is the fruition of a state sponsored sex reassignment surgery program for those who want the procedure. She has also been advocating for the legalization of  same-sex marriage in Cuba, but the government claims to be waiting for ”the right time.”

While Cuba has had a mixed history with regards of its treatment of sexual minorities, it has in many ways gone much farther much faster than many other countries. Cuba is constantly looking for ways to demonstrate that the government is a progressive regime that respects the basic rights of the Cuban population, thereby making the US embargo/blockade of the island  even more ridiculous and outdated. Perhaps now that so many other Latin American countries have legalized or are moving towards same-sex marriage, the time is finally right and Cuba can use same-sex marriage as another stab at US oppression?