Leaving Truth Outside the Court House at Bradley Manning’s Trial 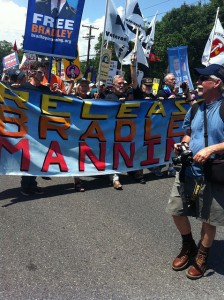 The following post is written by Medea Benjamin, founder of CODEPINK and Global Exchange, and retired US Army Colonel and former US diplomat Ann Wright.

—
Leaving Truth Outside the Court House at Bradley Manning’s Trial

It was an early morning, getting out to Ft. Meade, Maryland by 7am to join the group of hearty activists standing out (in) the rain, greeting the journalists coming into the Bradley Manning hearing with chants of “Whistleblowing is not a crime, Free Bradley Manning.” The activists, many with groups like The Bradley Manning Support Committee, Veterans for Peace, CODEPINK and Iraq Vets Against the War, had come from all over the country to show support for Manning during the upcoming weeks of the trial.

After a stint at the bullhorn, we got into the car to drive onto the base and get on line to try to get into the courtroom or the overflow room. With Ann Wright’s retired military ID, we got to bypass the long line of cars snaking around the checkpoint and breeze right in. About a dozen people were already on line, in the rain. Some were well-known characters, like professor Cornell West, author Chris Hedges, lawyer Michael Ratner and ACLU lawyer Ben Wisner; others were individuals who had come from as far away as Ireland and Mexico to support Manning.

It’s great that court martial trials are open to the public. But it’s absurd that this epic trial is being held in a tiny courtroom that only fits a total of 50 people. “It’s a trial of the century being conducted in a shoebox,” complained attorney Michael Ratner. Only 16 spaces were allocated to the public; the rest had to go to an overflow theatre that seated about 100, or a trailer next to the courtroom with room for 35. The press had a separate room where they could bring their computers and phones, although they were not allowed to transmit anything during the trial—just during the breaks.

Going through security for the courtroom, we were not allowed to bring any electronics. And there was a bit of a dust-up around t-shirts: some people with slogans on their shirts were made to turn them inside out, while others escaped the censors. It seems that “LOVE”, “Peace” and “Stay Human” could sneak by, but “TRUTH” and “Free Bradley” didn’t make it.

Once inside, we immediately saw the back of Bradley Manning’s shaved head, and his wire-rimmed glasses jutting out from the side. “He looks just like my grandson,” said CODEPINK Barbara Briggs from Sebastapol, California. “How tragic that this 25-year-old is facing life in prison.”

It was also sad to see that almost none of Manning’s family was there—only an aunt and cousin.

Manning had requested a court-martial by judge rather than by a jury of his peers.The judge, Colonel Denise Lind, said last month she would close parts of the trial to the public to protect classified material.

The Prosecution presented its opening statement using an extensive power point that detailed the charges and specifications, and a brief synopsis that the testimony each witness will give.  The Prosecution said that FPC Manning had purposefully aided and abetted the enemy through the Wikileaks documents that Manning downloaded. He concluded by saying that Osama bin Laden requested and received a copy of internal U.S. military logs of the war in Afghanistan from another member of al-Qaeda.

The Defense’s opening statement responded that Manning is young and naïve but with good intentions.  Manning’s attorney David Coombs said Manning thought that the public should know what goes on in war and how one’s government operates.  He was troubled by the response of the government to requests for information from the Reuters news agency concerning the deaths of their journalists from an Apache helicopter attack (the video now known as Collateral Murder), as well as the 2009 Gharani air strike that killed 150 civilians.  Coombs insisted that Manning made the documents available for the public, not for the enemy, and that the documents leaked were largely publicly available information with no critical intelligence sources.

At a pretrial hearing in February, Manning admitted to 10 offenses that could land him 20 years in prison. But the government insisted on upping the ante by accusing him of “aiding the enemy”—a charge that could result in life in prison. The court-martial may take 2 or 3 months to complete the presentation of evidence for the 12 counts to which Manning has not plead guilty. Numerous secret witnesses will be testifying for the prosecution.

While the “aiding the enemy” charge is going to be very difficult to prove, Michael Ratner, the president emeritus of the Center for Constitutional Rights, said the fact that the government is pursuing this charge “sends a message to every soldier and every journalist that they are literally taking their lives in their hands if they dare speak out against wrongdoing.”

Manning’s trial, which is slated to last three months, is the most stark example of the Obama administration’s relentless stance against whistleblowers. “This president has the  tried to prosecute six whistleblowers under the Espionage Act, twice as many as all previous presidencies combined,” said Cornell West. “President Obama is determined to stop the public from knowing about government wrongdoing.”

In pretrial proceedings, Manning said his motivation was to “spark a domestic debate over the role of the military and our foreign policy in general.” Certainly that debate is long overdue. So is the debate about (the) right of the public to be informed about what our governments are doing in our name.

Medea Benjamin, founder of CODEPINK and Global Exchange, is author of “Drone Warfare: Killing by Remote Control.” Ann Wright is a retired US Army Colonel and former US diplomat who resigned in 2003 in opposition to the Iraq War.  She is the co-author of “Dissent: Voices of Conscience.”