Hershey’s and Fair Trade: Is it a Victory? 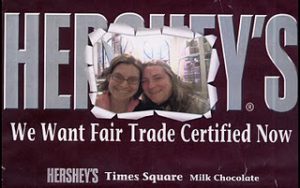 Last month, Hershey’s announced its next step toward 100% certified sustainable cocoa by committing to source cocoa through three of the world’s most recognized cocoa certifying organizations, including Fair Trade USA.

Global Exchange was excited to hear this announcement and praised activists like you for making a big corporation give in to the demands of the consumer to have a more sustainable product and have greater supply chain accountability.

Was calling this announcement a victory premature or even misleading?

To answer this question we must first unpack the meaning behind Hershey’s decision and the road that has led to it.

The push for Fair Trade

In 2006, Global Exchange joined a coalition of organizations to target the American chocolate icon Hershey’s to ‘Raise the Bar’ and go Fair Trade. The thought was: if this industry giant could start sourcing Fair Trade certified cocoa, other large chocolate companies would follow. 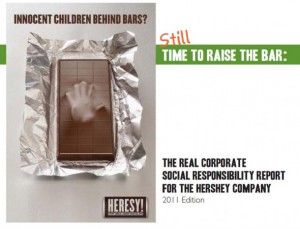 Through the Raise the Bar, Hershey coalition, we collected countless petition signatures, held film screening showing the Dark Side of Chocolate, made thousands of Fair Trade s’mores, released Hershey’s true corporate social responsibility report, carried out a vibrant brand-jamming effort, went to the company’s shareholder meeting in Hershey, Pennsylvania and staged a huge rally in front of the Hershey store in Times Square.

Fair Trade activists sustained this effort for seven years! You sent those letters to Hershey’s, you showed Dark Side of Chocolate in your communities, you served up Fair Trade s’mores, you submitted your brand jams, and you gathered in front of the Hershey’s store with the same message: It’s time to go Fair Trade.

Then, in January of 2012 Hershey’s made a surprising turn: the company stated it would commit to buying Rainforest Alliance cocoa for its Bliss and Dagoba chocolate products. The Raise the Bar, Hershey coalition cautiously congratulated the company for taking its first step towards sustainably harvested cocoa and the elimination of child labor.

The campaign continued, however, to push Hershey’s to make a bigger commitment and this time to make it Fair Trade – the only certification that achieves the goal of supply chain transparency, a fair price for farmers, the elimination of forced child labor and a social premium aimed at fostering democratic community development.

“What does that mean?” we asked. Since the announcement did not state what kind of third party certification they had chosen, we continued to flood the company’s inbox with letters and petitions urging Hershey’s to choose Fair Trade.

So, when news came that Hershey’s would finally be working with a Fair Trade organization in their path to 100% certified cocoa, we saw a victory.

Hershey’s has announced that it has begun its path to being 100% certified sustainable by 2020. The company has released proposed benchmarks toward these 2020 goals, including 10% of its supply being certified by the end of 2013. In three years time, nearly half of the supply will be certified, with four years left to reach that 100% goal.

In the beginning stages, Hershey’s plans to buy from the three main certifiers in the game — UTZ, Rainforest Alliance, and Fair Trade USA. As the company’s buying volume increases, Hershey’s will be working with other well-established certifiers to reach more farmers worldwide.

According to the 2012 Cocoa Barometer, Hershey’s buys 200,000 metrics tons of cocoa from West Africa. This means that 200,000 tons will be certified as free of the worst forms of child labor, which is what UTZ, Rainforest Alliance, and Fair Trade safeguard against.  If one third of this is Fair Trade, that will be over 66,000 metric tons of Fair Trade cocoa! This will be a tremendous boost to farmers who currently produce more Fair Trade cocoa than the can sell at Fair Trade prices.

Raise the Bar and Fair Trade activists have asked for benchmarks in terms of volume over time. We don’t believe that progress can be made without verifiable steps in the right direction. Hershey’s has responded with pretty aggressive moves starting this year (10% of its supply by the end of 2013).

These benchmarks represent trial balloons though, and they are going to be assessing the results on various factors:

So our work is not done yet!

And according to Tulane University’s study on certifiers and child labor, Fair Trade is doing more to combat child labor than other certifications so we as consumers must continue to push for even more purchases of Fair Trade Certified cocoa!

So, do we call this a victory or not? 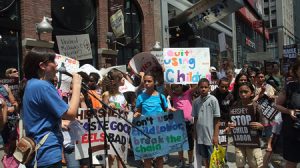 All social justice movements are marked by small and large wins and small and large setbacks — the road is never straight and narrow with uncomplicated stages of struggle. Justice requires the long, messy work of keeping on, dedicating ourselves to a vision of the world where no children go to bed hungry; where families earn enough to send their kids to school and where there is space for communities to develop democratically.

There isn’t an end to the movement but if we want to stay engaged we have to celebrate the victories, even as partial as they are when we achieve them. If you never see the results of your letters, petitions, phone calls, and actions you aren’t going to be motivated to take the next step. We did make a difference: a large multi-national company listened to activists and conscious consumers. Now its up to us to make sure all of this happens — to push for and continue buy chocolate labeled Fair Trade Certified!

Hershey’s is still a large corporation and will make decisions from that perspective. For some of us, that will always be problematic. We prefer integrated systems with 100% transparency, fully Fair Trade, support for democratic cooperatives and educational labeling for the U.S. consumer.

Both struggles are meaningful and can be coordinated – pushing for Fair Trade values with the big companies and supporting the smaller companies that are 100% fully Fair Trade already. We want to support more farmers and push aggressively for the highest bar while educating and bringing lots of people into the movement in the clearest and most exciting way. That means we have to celebrate our victories when we can and then get up and keep on working.