What About Peace Contest Announces the Winners 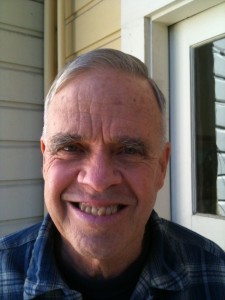 Thanks to the careful consideration by our Grand Judge, David Hartsough – We now have winners of the international “What About Peace?” contest!

David Hartsough, the co-founder of the Nonviolent Peaceforce  and the director of Peaceworkers  has dedicated his life to non-violence since the day his father brought him to Montgomery Alabama when he was 15 years old and he got to meet Martin Luther King. He believes, as president Kennedy did, that “ those who make peaceful change impossible, make violent change inevitable”.

When I asked David what message he had for 14- 20 year olds—he said that the most important lesson of his life was that 12 students with some courage and some training in non-violence can change history.

People all over the world are realizing that we don’t have to be victims, that it’s not the people with the guns and the weapons that have the power, we do.  We’ll share more of David’s stories right here on our People to People blog as we showcase some of the beautiful work of this year’s contestant.

David was attending a meeting at Global Exchange when all of the artwork was hung in the conference room and the written pieces laid out for reading pleasure.  He was so inspired by all of the creativity displayed and was honored when we asked him to be our grand judge!

And now, the moment we’ve all been waiting for… 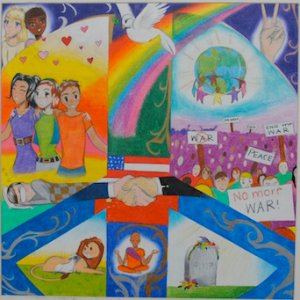 See All the Winners for Yourself!

On our website: Would you like to read the written pieces and see all the beautiful visual pieces? Both written and visual winners are posted on the What About Peace? 2013 Winners webpage.

To all who took part in this years’ contest…beautiful work letting us all know that peace is possible. Congratulations to all of you who participated!