Corporate Executives Say Fracking is GOOD for You. Do You Trust Them?

Here’s a 90 second test to see if a picture is truly worth 1,000 words when it comes to fracking. After watching this image video, answer one question: would you want fracking in your backyard?

Still believe the corporate hype that fracking is safe and good for the economy? Then read on.

The truth is out there sitting next to, hovering over and lying below every hydro fracking shale “play”  in the U.S.  Wherever frackers frack, water water and more water is contaminated and toxified—along with the soil and the air, and the atmosphere.

Things like scientific evidence don’t seem to matter much to corporate executives and their bought and paid for politicians, PR firms and lobbyists, who argue that fracking is absolutely safe, bringing prosperity and energy security.  And just like that, despite the mounting evidence that fracking is dirty and dangerous…we have a “debate.”  This “syndrome” has now been identified as “The Sky is Pink,” coined by former Pittsburgh City Councilman Doug Shields, and made famous in the video short of the same name, by famed fracking documentary filmmaker, Josh Fox.

After Pittsburgh PA’s city water supply was contaminated by gas drilling, City Councilman Doug Shields worked to pass an ordinance asserting the community’s right to ban fracking. In this 18 minute video short, Shields describes for Josh how industry professionals have used money to cast doubt on scientific evidence surrounding fracking. Science says the sky is blue. The gas industry says it is pink. Suddenly, there’s a debate. “They’re coming in and telling me the sky is pink all day,” says Shields, adding that in the fracking hub surrounding Harrisburg, PA “the sky actually IS pink.”

Watch the video “Frackers and Ambitious Governors Beware: Josh Fox is Back, and the Sky Isn’t Pink” here. 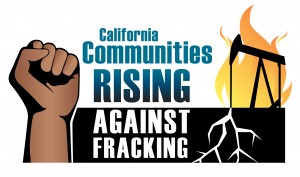 Global Exchange, Doug Shields and our partners are hitting the road in CA

More than 50% of Californians don’t know what fracking IS, let alone where it is or what its impacts might be.  So we’re hitting the road to share the facts and stories from other communities who have faced fracking already.

The speaking tour targets impacted communities throughout the largest shale regions of California. We’re bringing community voices, scientists, and anti-fracking leaders to California audiences, and sharing ways for communities to engage—from working with Global Exchange to pass a “rights-based” local ban like Pittsburgh, PA has done, to all of the strategies employed by the growing anti-fracking movement in California.

If you don’t live near the route, but are concerned about fracking, let us know, because we’re doing a second tour leg this summer, maybe through your hometown.

Shannon Biggs is the director of the Community Rights program at Global Exchange.