Union busting at the Chiquita plantation 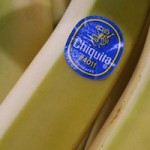 Join Global Exchange and our partners at the International Labor Rights Forum as we call on Chiquita banana supplier, Tres Hermanas, to bargain with SITRAINBA, the legally-recognized union on its three banana plantations in southern Honduras.

Since 2009, workers at Tres Hermanas have raised concerns over a pattern of labor rights violations, including failure to pay the minimum wage, unpaid overtime, and the illegal firing of workers attempting to exercise their right to organize. In order to protect their rights, workers on Tres Hermanas’ plantations formed the union SITRAINBA, which was officially recognized by the Honduran Ministry of Labor on August 15, 2012. 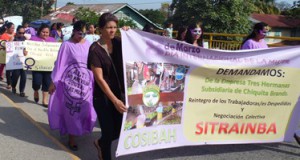 But instead of recognizing and bargaining with SITRAINBA as required by Honduras’ labor law, Tres Hermanas’ management has launched a campaign of anti-union harassment, including firing four women who were prominent union supporters. These egregious violations of the workers’ internationally recognized right to organize are all the more shocking since the plantations are Rainforest Alliance certified.

Take a stand against union busting by sending a letter to Tres Hermanas demanding that the management bargain with SITRAINBA and reinstate the fired union members.

Learn more about the International Labor Rights Forum and their work to build a better world for workers.