After a two-year battle with cancer, Venezuelan President Hugo Chávez died of a heart attack on March 5th, 2013 at the age of 58.

The government of Venezuela has since declared a seven day period of mourning in honor of the Commandante, heads of state from across Latin America have traveled to Caracas to issue tribute to the President and Sean Penn and Rev. Jesse Jackson were among those present at the funeral today. At Global Exchange we reflect on the legacy and impact Hugo Rafael Chávez Frías leaves on Venezuela and the world.

Hugo Chávez was a champion of the poor and marginalized and a staunch believer in the integration of Latin America. He believed in uniting Latin America as Simón Bolívar had proclaimed. As former Brazilian President, Luiz Inácio Lula da Silva credits in his obituary of Chávez, he was not afraid to stand up to the U.S. hegemony and push for a system based on social justice.

Since the election of Hugo Chávez in 1999, Venezuela embarked on a profound and controversial project of reinventing society from within, changing a political and economic system that benefited the few and powerful to one that would give ordinary Venezuelans a seat at the table. Global Exchange was proud to launch Reality Tours to the country during this time and witness the incredible transformation of society, much of it documented in the movie, South of the Border. 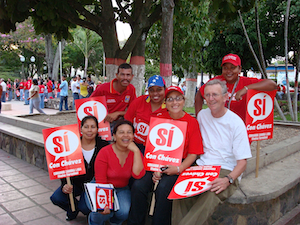 Reality Tours to Venezuela flourished in the early millennium with Global Exchange establishing a full time presence in the country – on one Reality Tour, participants were invited as guests on the Aló Presidente weekly television show in which President Chávez spoke to the nation and toured social programs active in the country. This brought criticism of Global Exchange, some of which still live on our Wikipedia page. But we continue to offer the trips, believe that people who have traveled and met with Venezuelans can tell a story far better than the mainstream media coverage.

Not only did his government give the people basic needs to survive, he also empowered communities with tools to participate in democracy in order to create positive change. It brought various grassroots movements together, including opposition groups. Much of this was recorded in a book, Venezuela Speaks! Voices from the Grassroots written by one-time Global Exchange staffers JoJo Farrell, Carlos Martinez and Michael Fox. 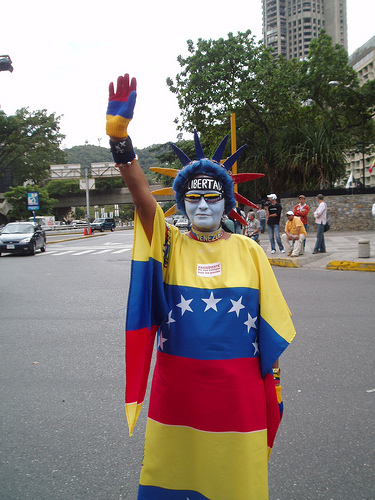 Beyond Venezuela, Hugo Chávez worked hard to establish a strong Latin America independent of influence from the United States and other countries in the North, proposing and championing the ALBA trade block. Always critical of U.S. Interference, he called ‘Yankee imperialism’ a ‘threat for all the people of the world’. He highlighted the importance of addressing climate change and pushed for the end of U.S.-backed wars. Venezuela was always the first to respond to natural disasters in the Caribbean and helped neighboring countries get out of their debt.

Speaking on Tuesday after hearing the announcement of the passing of Chávez, Global Exchange’s Reality Tours trip coordinator, Alvaro Morillo, said, ‘it is a great loss and a great pain for Venezuelans … We are mourning and sad but in healthy peace and with the hope that there will be respect of the pain we are feeling. Well, Chávez left a legacy of his prinicpals and work for the poor and it is this in which we will continue working … Venezuela is going forward CHAVEZ WILL LIVE IN HEARTS FOREVER! 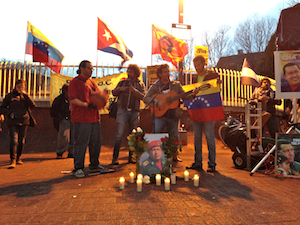