A week of action to stop tar sands profiteers is planned for next month, and Global Exchange is proud to be sponsoring this call for action. Here’s more about it from Ramsey Sprague of tarsandsblockade.org.

Join the Week of Action to Stop Tar Sands Profiteers

Last week I was arrested at a pipeline industry convention where TransCanada was lecturing on pipeline safety compliance. I chained myself to the loud speaker because I had a message to deliver!
The tar sands industry and its investors are spending billions on dangerous pipelines to open the Canadian tar sands to unbridled exploitation: the Keystone XL, the Northern Gateway, and the Trailbreaker, to name a few….but there’s one thing standing in their way: you. Yes, you!

Grassroots resistance begins with you, and together, we can send a message to TransCanada and their profiteers: Stop scheming to expand Alberta tar sands exploitation and bankrolling Keystone XL.

Investors are becoming uncertain about the future of Keystone XL and that’s why Tar Sands Blockade and our allies are calling for a Week of Action to Stop Tar Sands Profiteers, March 16 – 23.

The week of action is in solidarity with Great Plains Tar Sands Resistance’s direct action training camp to stop the KXL in Oklahoma thats happening at the same time. 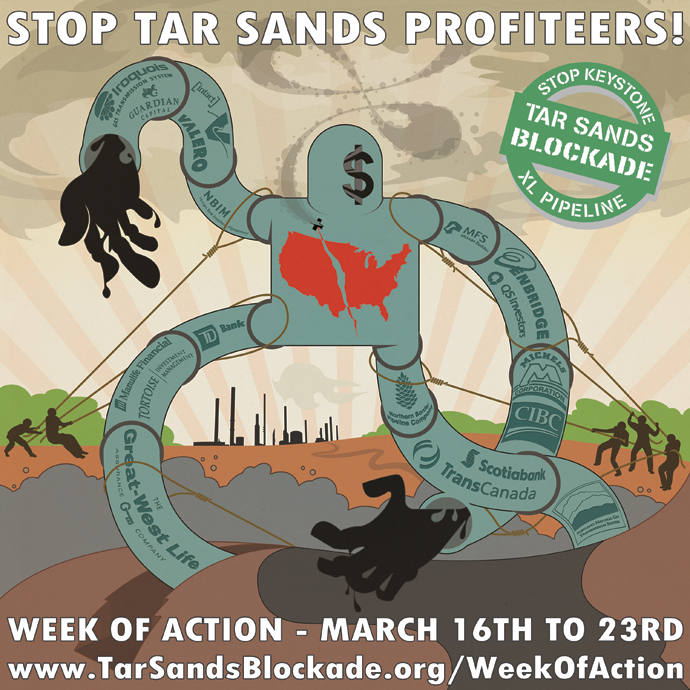 From my indigenous brothers and sisters in Alberta most impacted by tar sands extraction to the environmental racism of refining in Houston’s toxic East End, TransCanada’s business as usual means death and destruction for the biosphere and our communities. Together we can confront these toxic profiteers by showing up at their offices, public events, and extraction sites to demonstrate that we won’t stop until they do. You don’t need to come to Texas or Oklahoma or go to DC to rise up and defend your home!

Find a TransCanada investor in your community and hold your own action.

Extreme energy extraction like mountain top removal, fracking, and tar sands exploitation are fueling climate chaos and disproportionally poisoning low income and communities of color at an alarming rate. Institutional avenues of change –corrupt politicians and regulators – have failed to protect our most impacted, vulnerable communities.

Tar Sands Blockade has done many things to stop KXL, from tree sits to locking ourselves to heavy machinery, and we’ve asked for help before. But to help us stop KXL now means we must go straight to the folks investing in the projects that are poisoning our friends and families and tell them enough is enough! Investing in Keystone XL is as toxic as the contents of their pipe!

Sign up to plan an action to Stop Tar Sands Profiteers, March 16-23!

To stop the most destructive project on Earth and preserve any hope of a liveable planet, we must put a end to “business as usual.” It’s time to act now and stop those working to poison our world and strip-mine our future. It’s time to take direct action to build the world we know is possible.