Captivating Video ‘I am a Full Woman’ Will Move You 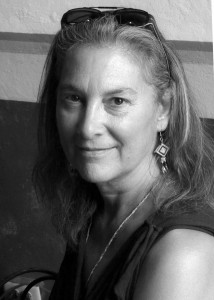 Photographer Linda Wolf is a proud past Reality Tours participant. Through her photographs you sort of feel you know her and those she captures.

Her global journalistic photos seem eerily familiar, even the ones of places you’ve never been. And her people pictures exude the human spirit, as showcased in her video below entitled, “I am a Full Woman.”

Definitely watch the video, but before you do…I asked Linda to share some thoughts for this post about what it was like to travel on a Reality Tour. Here’s what she had to say:

I went on the Global Exchange trip to China with (Global Exchange co-founder) Kevin Danaher. First, I’d go anywhere with Kevin. He has been an inspiration to me since I interviewed him for my 2nd book, Global Uprising: Confronting the Tyrannies of the 21st Century. Kevin role modeled the best in leaders, I have to say. We were a small rag-tag group, and herding us was like herding sheep.

I once asked him how he could keep his composure when one of us was either dragging too much baggage, or always making us late. He said something I will always remember. “I look at the intentions behind people’s actions.” But, I think Kevin is just super chill – another reason I love Global Exchange. Everyone is super chill.

Everyone was easy to work with and bent over backwards to accommodate my needs, which centered around doing photography. They stopped the bus once so I could get out and take a photo. I felt I had complete freedom to go off on my own, within the confines of making sure I got back to the hotel in time for us to take off for airports or trains on time! I am so glad I went on that tour. In fact, I got some of my most favorite photos of people for Full Woman and other exhibitions, from that tour.

I’m not a person who normally takes tours of countries. I usually go alone because I don’t find tours that I feel care (about) the same things I care about — but Global Exchange went beyond what I would have wanted to do by myself. One thing I was really happy about was the way the tour was set up to support local, Chinese businesses – we only stayed in Chinese owned and run hotels, ate in only Chinese owned restaurants, and we did not follow the tourist routes. 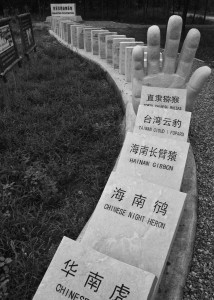 My tour was called “A Sustainability Tour of China” — One of the highlights of my trip was going to the Graveyard of Extinction at The Nanhaizi David’s Deer Park in Beijing. There are approximately 145 tombstones in the cemetery, toppled over on each other like dominoes that cover a space of 100 meters. 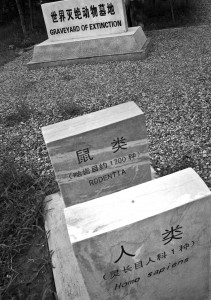 Each stone is inscribed with the name of the species and the date released by World Conservation Union, that species went extinct. At the end of the line of falling tombstones stands a large concrete hand which represents where we are now, as well as what will happen if each species beyond the hand becomes extinct.

The tombstone for Homo Sapiens is not far down the line behind the hand. Seeing so clearly how interconnected we are to other species was astounding and certainly motivating to spread the messages I learned back home when I got off the tour.

Watch Linda’s “I am a Full Woman” Video: