Largest US Climate Rally Ever Feb. 17th: Why I’m Taking Action and How You Can Too

Chances are that if you are reading this, you will know how I feel about the Tar Sands in Alberta, Canada. This oil extraction method is intensive and causes  irrevocable damage to the environment. The area is a catastrophic scar on the Earth. Land has been destroyed forever. Water has been permanently poisoned. First Nations communities struggle downstream to maintain a healthy and traditional lifestyle. Laborers are shipped in from Eastern Canada and Somalia to work intensive schedules. Crime drug and alcohol addiction has soared on the streets of Ft. McMurray. I’ve seen it, it’s a mess.

Communities across Canada and the U.S. have fought to keep pipelines used to transport the stuff off their land and out to sea because pipelines leak, they just do; because communities know that the short term jobs that it takes to build a pipeline are just that – short term, (while the effects are long term); and because companies like TransCanada don’t care about local impact or people like me and you.

The fate of the Keystone XL pipeline is still on the table (it’s been a roller coaster ride to date). If approved it will crack open the Tar Sands in unimaginable ways. It will increase extraction from the Tar Sands by 700,000 barrels a day and send it down to the Gulf of Mexico for processing and export. 350.org Bill McKibben has repeatedly called Keystone XL the fuse to the largest ‘carbon bomb’ we’ll ever know. 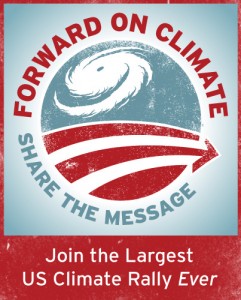 So, I’m taking action, with literally tens of thousands of others, to send an immediate message to President Obama and Secretary of State John Kerry (who says he wants to make an announcement on Keystone XL ‘in the near term‘). This rally on February 17 is a first step to ensuring the President makes real strides in his second term on climate change.

Oh right, and the Tar Sands contribute to climate change, something big. Stopping Keystone XL is the first real stride the President can take.

On February 17, actions will take place across the country to move this country Forward on Climate. I am proud we are supporting the efforts in Washington D.C. and San Francisco. Momentum is huge – there are scientists, movie stars, Canadians, Canadian scientists and Canadian music stars supporting the efforts, thousands of people like you are coming to D.C. and the potential for thousands of others to take action online.

1) Watch this! Specialty Studios is offering the award-winning film WHITE WATER, BLACK GOLD free online for viewing and sharing by anyone through February 18.
2) Spread the word on Facebook and Twitter: Here are some social media messages you can use to help promote the climate rally action on Facebook and Twitter. Please share with your followers! (Or simply click the “Like” and “Retweet” buttons on the top right of this post.

350.org is using a new online tool to amplify our voices on Twitter and Facebook. It’s called Thunderclap — because together, that’s how loud we can be. They’re hoping to get 10,000 people on board — click here to join: 350.org/thunderclap.

There will be a giant screen at the rally, showing photos and messages of support from across the country — to get your message on the screen, take a photo showing your support for the action, or of a part of your community that you want protected from climate change, then email it to forwardonclimatephotos@350.org, with your location in the subject line. (Or, you can post your photo to Twitter or Instagram with the hashtag #ForwardOnClimate).

Folks at 350.org will pick out the best ones to put on the screen for tens of thousands of people to see, just outside the White House.

Finally, the 350.org web team put together this nifty sharable sign-maker that you can use to make a custom sign declaring your support for the action. They’re beautiful, and easy to share on your social networks. Check it out: sign.350.org.

Don’t forget to “like” and “retweet” this post to spread the word about the largest ever U.S. climate rally. Buttons are on the top right.