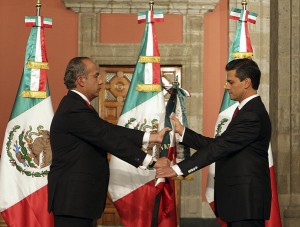 The Mexican Peace Caravan that crossed the United States last summer was bracketed between elections. It began in Tijuana, just six weeks after Mexico’s July presidential election, and concluded in Washington just six weeks before Obama’s re-election. Now, as 2013 is dawning, Mexicans can begin to see the outlines and true colors of their return to PRI rule.

On Dec. 1, in the final act of his blood-drenched presidency, Felipe Calderón passed his tri-color sash to incoming PRI strong-man, and now President, Enrique Peña Nieto. The handover was backlit by protest and chilled by concerns about what it means to hand Mexico’s executive branch back to a party that, until 2000, had absolutely controlled — and corrupted — the nation during 71 years of unbroken one-party rule.

Of course, millions of Mexicans voted for Peña Nieto last July. Some undoubtedly yearn for the peace and security they associate with the earlier era of PRI domination. To suppose that restoring the PRI’s power might facilitate clandestine contact with major drug trafficking organizations is not unreasonable. In decades past, such ties have reportedly allowed PRI operators to communicate with, take bribes from, and exert significant influence on major drug trafficking organizations. The current vision is of a restored pax mafiosa that could reset or even free the country entirely from the disastrously aggressive drug war policies of outgoing President Calderón.

Few say so publically, but whispers that Peña Nieto should somehow reach out to the drug bosses are widespread. Peña Nieto decried this notion in a New York Times op-ed the day after the election, but speculation continues about the possibility of a pact that could effectively legalize the wealth of the big traffickers in exchange for peace and their eventual conversion to legal enterprise. Such an amnesty brought the Kennedys and countless other American families back into the fold after U.S. alcohol prohibition was lifted in 1933. More recently, large drug syndicates in South East Asia’s golden triangle have paid steep one-time taxes to repatriate capital into the legal economy as part of a broader deal aimed at ending their participation in the drug trade.

Yet, in fact, even if Peña Nieto did want to return Mexico to an imagined earlier era of tolerance or otherwise evolve drug and security policies, it won’t be easy. This is especially true due to continuing U.S. rejection of real discussion about international drug policy reform. Yet ongoing prohibition guarantees continued drug mega-profits that are a siren song for the most ruthless criminal elements. This grim reality, in combination with strong U.S. pressures to stay the drug war course, severely limits the options and flexibility of Mexico’s new president. 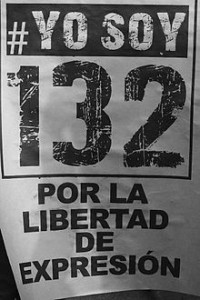 Peña Nieto also faces a suspicious civil society and energized opposition. More than 60% of the electorate rejected the PRI and voted for opposition candidates. A significant social movement arose to oppose his election under the broad banner of Yo Soy 132. This group continues to organize on both sides of the border and was an essential part of gathering grass roots support for the Peace Caravan in several key cities.

Millions of Mexicans fear the PRI will resort to its authoritarian playbook while it pushes the same brutal mix of neo-liberal policies the party forced into place at great cost to Mexico’s economic sovereignty and well being during the crisis ridden 1980’s and 90’s.

But the realities of deepening poverty, inequality, and humanitarian crisis don’t stop Mexico’s plutocrats and their enablers from smearing lipstick on the pig of an economy that has left a majority of Mexicans in poverty. I recommend this article “Mexico’s New President Is Off to a Troubling Start” that UNAM professor John Ackerman just published in The Atlantic Magazine. In it, Ackerman repudiates highbrow happy talk about Peña Nieto and the Mexican economy currently emanating from Washington establishment sources such as the Woodrow Wilson Institute, the Inter-American Dialogue, and the Council on Foreign Relations.

Many agree that Mexico urgently needs to undertake thorough and difficult internal reforms. To be effective, such reforms must challenge impunity all the way to the upper echelons of the military and Federal Police as well as top political and corporate circles. Washington officials and the Obama administration have shown little stomach for pushing such actions on Calderón. Similarly, Obama gave no visible signs of pushing Peña Nieto on such reforms during their first encounter in late November. Pressure for change must come from somewhere else. That is why we must continue to build the movement against the drug war into an unstoppable force.

The violence unleashed in Mexico during Calderon’s six long years has resulted in 60,000 murders but resolved nothing. In fact, drug trafficking organizations have thrived, diversified, and some think that they have deepened their penetration and corruption of Mexico’s institutions during this period. Any genuine change starts with an end to the drug war. 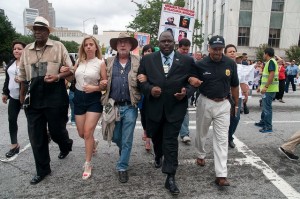 Last summer, victims and activists from Mexico rolled with people from across the United States for a 5,700 mile-journey through 29 cities. They had the support of Global Exchange and more than 200 other U.S. organizations who shared the ambitious goal of revealing how Mexico’s murder epidemic is rooted in more than forty years of deadly and fruitless drug war fostered, funded, and implemented by the United States.

The caravan relentlessly made the case for concerted action north of the border to regulate drugs more sensibly in order to remove the hyper-profits of illicit drug trafficking. Such a move could dramatically reduce the large scale brutality in Mexico, slow southbound gun smuggling, reverse mass incarceration trends in the U.S., challenge corruption on both sides of the border, and address the distortion of our national security priorities.

Mexican peace movement organizers are calling for a meeting in early 2013 to evaluate, strategize, and strengthen ongoing work between the organizations and peoples movements that built the Caravan on both sides of the border. They know the momentum around drug policy is on the side of reformers.

Recent elections in Washington state and Colorado are potential harbingers of a mature, new approach to drug policy that embraces regulation and public health metrics instead of the “just say no” militarization we have lived with for decades. Domestic and international opinion is moving faster than the politicians. And on a range of related questions — like the absurd legality of assault weapons for civilians or ill-advised U.S. support of Mexico’s military security apparatus — our job is to keep the debate moving and force them to catch up.