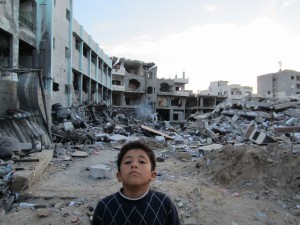 Global Exchange and CODEPINK co-founder Medea Benjamin just returned from an emergency delegation to Gaza. Learn more about how you can support the boycott, divestment and sanctions movement with the Economic Activism for Palestine campaign.

Also see December 1, Truth and Trauma in Gaza and December 2, We Want It to Stop.

Eman El-Hawi, a smart and perky 24-year-old business student from Gaza got teary when she told our delegation about what she witnessed during the eight days that Israel pounded Gaza. “I saw the babies being brought into the hospital, some dead, some wounded. I couldn’t believe Israel was doing this again, just like four years ago. But at least this time,” she said with pride, “we struck back.”

The fight was totally disproportionate. Israeli F-16s, drones and Apache helicopters unleashed their fury over this tiny strip of land, leaving 174 dead, over one thousand wounded, as well as homes, schools, hospitals, mosques and government buildings damaged and destroyed. On the Palestinian side, crude Qassam rockets left six Israelis dead and caused little damage. But for many Palestinians, it was a perverse kind of victory.

If the Israeli government was trying to teach the Palestinians a lesson with this latest pummeling, the unfortunate lesson many learned was that the only way to deal with Israel is through firepower. We asked people why this round of violence lasted only eight days, unlike the 22-day attack in 2008. Some credited the Arab Spring that has created a new wave of pro-Palestinian public sentiment that governments have to respond to—especially in Egypt where the ceasefire was brokered. But others believed the Israelis backed down because Palestinian rockets had reached into the heart of Israel.

“It’s not that we want to kill Israelis but we want them to know we are not helpless,” said Ahmed Al Sahbany, an engineering student. “We want them to know that when they attack us mercilessly, when they treat us like animals, we will fight back.” A rap song by a West Bank group called “Strike, Strike Tel Aviv” that came out during the fighting was a hit among many of the Palestinian youth.

Many young people we talked to were dismissive of peace talks with Israel. They say the Palestinian Authority leadership in the West Bank has been talking to the Israelis for 18 years and all they have achieved is a new brand of apartheid, with bypass roads, separation walls, expanding settlements, Jerusalem ethnically cleansed, 500-600 checkpoints, and the continued siege of Gaza.

This latest round of attacks is just a continuation of the daily attacks we live with here in Gaza every day,” said youth leader Majed Abusalama. “Israeli soldiers shoot at our fishermen and confiscate their boats just for fishing in waters that belong to us. Israeli soldiers shoot at our farmers when they try to farm their lands that are close to the border, lands that belong to our farmers—our land!” In fact, a week after the ceasefire, our delegation visited a group of farmers in Rafah who were still unable to farm a good portion of their land. One of them, hobbling around in a cast, had just been shot in the leg, without warning, for venturing too close to the fence that separates Israel and Gaza.

Raji Sourani, a lawyer and director of the Palestinian Center for Human Rights, a group that meticulously documented the crimes committed during the 8-day war, lost his normally calm demeanor when speaking to our delegation about Obama and the US Congressional support for what they called Israel’s right to defend itself. “How can Obama say Israel is defending itself when we are the real victims? We are the target of this dirty war, just like we were the last time in 2008, just like we are every day,” Sourani shouted. “The Israelis practice the law of the jungle with full legal immunity and no accountability.”

Sourani was happy with the vote that gave Palestine a seat at the UN because it showed that Israel and the US were opposed by most of the rest of the world. But he said the UN seat would only be meaningful if the Palestinian Authority used it as an opportunity to take Israel to the International Criminal Court, something the Western powers are pressuring them not to do.

The most poignant indictment of Israel and the Western powers came from Jamal Dalu, the shopkeeper whose home in Gaza City was demolished by an Israeli bomb that left 12 dead, including his wife and four children. Looking around at the wreckage that was once his home and family, he faulted President Obama for giving Israel the green light to carry out its attacks. “Obama, you say you want to teach us about democracy and the rule of law. Is this what you mean by democracy? Is this the rule of law?” he repeated over and over.

“I really don’t understand what the Israelis and their backers in the United States want,” said Sourani, throwing up his hands in despair. “They want us to vote, and when we do they refuse the recognize the winner. They say they want a two-state solution, but keep building settlements that make two states impossible. But if we say we want to live in a single, democratic state, they say we want the destruction of Israel because we produce lots of babies and will outnumber them. Honestly, I don’t know what they really want, but I can tell you this: the way things are right now can’t last forever, and time is running out.”

The delegation brought funds from Americans to support the Shifa Hospital and the Palestinian Red Crescent, and took up collections to help the Dalu family and a disabled group called the Al Jazeera Club whose building had been destroyed. The funds, and the gesture of solidarity, was much appreciated, especially since the US government is giving $3 billion a year to support Israel’s militarism. Also appreciated is the boycott, divestment and sanctions campaign that is providing a nonviolent means for people around the world to challenge Israeli policy.

“Please don’t wait for the third Israeli round of attacks,” said Hala Ashi, a 24-year-old whose home was badly damaged and whose neighbor was killed, “and help show us, the youth of Gaza, that violence is not the answer.”