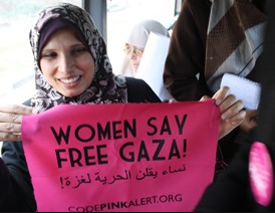 In the wake of the ceasefire brokered by Egypt, a 20-person delegation of American journalists and peace advocates is traveling to the decimated territory to witness the hardships now facing the 1.7 million residents, deliver emergency aid and call attention to the need for a longer-term strategy to achieve peace and justice for Palestinians.

“The U.S. government allowed Israel carte blanche for eight days while it pounded more than 1,000 sites in Gaza, disproportionately killing civilians,” noted Wright. “Americans of conscience must witness and report back on the heavy price exacted by our support of Israel, so that taxpayers back home will call for a more humane, productive use of their hard-earned dollars.”

A total of 162 Palestinians were killed during the attack. An estimated 73 percent were civilians, including more than 25 children. Five Israelis were killed. “We mourn the loss of lives on both sides,” said CODEPINK cofounder Medea Benjamin, “but we think it’s important to recognize the that the Palestinians have suffered much greater losses, and that the Israeli armaments used in the attack were financed largely by the United States, which sends Israel $3 billion in military funds every year.”