Susan B. Anthony beaten and jailed by police for casting her vote

No matter which side you butter your political bread, by now you’ve heard more than you ever wanted to about the election results and who won. But that’s just politics.

What you probably missed in the glare of the pundits flashy graphics and the incessant Wednesday morning quarterbacking were the real victories by and for people actually asserting their rights on Election Day against the powers that be. Yes, regardless of political affiliation; against the endlessly deep pockets and scare tactics of huge corporations; AND against the mighty robed ones of the Supreme Court—they prevailed. Big time. And they may have set the stage for the rest of the country to follow suit.

What does Susan B. Anthony have in common with voters in Montana, Ohio and Pennsylvania?

If Susan B. Anthony was afraid (and surely she was), she did not let her fear of being sued, ridiculed, harassed, beaten and jailed stop her from standing up for her rights.  And while voters in these states didn’t risk their personal security, on Election day, they took a stand for their rights, and they acted is if government belongs to us. Rights—as in, unalienable self-evident rights that come by virtue of being born, that cannot be given or granted, taken away or surrendered.

In the Big Sky state of Montana, where the Governor is a Democrat, but the electorate runs fire engine-red, you may have heard that the state voted to urge or direct Congress to enact a Constitutional Amendment to overturn corporate personhood, as did Colorado. But the real story is so much richer than that. 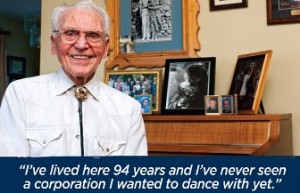 Many states—not only Montana—  included in their early Constitutions the subordination of corporations to the will of the people, and banned corporate political expenditures in state elections.  Over the years, most of those Constitutional provisions have been deleted to pave the way for more corporate-friendly laws—but not in Montana. In early January 2012, Montana’s state supreme court, in recognition of the rights of residents to determine the outcome of their elections, struck a defiant blow to the heart of the Super-PAC-creating-unlimited-corporate-elections-spending SCOTUS Citizens United decision, by restoring their state ban on corporate elections spending.

The federal court was quick to respond to this challenge of their supremacy by reaffirming Citizens United and striking down Montana’s Constitutional provision. And with the flick of a pen, five of the Robed Nine denied the 1 million residents of Montana their right to decide the proper role for corporations in local and state elections (take THAT democracy).

Montanans seemed to take this news personally, as a denial of their very real authority to govern corporate entities, and on Election day, reminded the learned SCOTUS who is boss in Big Sky country. By a landslide of 75% Montanans restored their rights on Election Day and sent corporations and the Supreme Court a powerful message. Initiative 166, officially called the Prohibition on Corporate Contributions and Expenditures in Montana Elections Act, was endorsed by the Governor (D), the Lt. Governor (R) and the former Secretary of State (R).

As C.B. Pearson, treasurer for the I-166 group, Stand with Montanans  put it, “For nearly a century, Montana had elections free of corporate money. But now our fair elections system is compromised. With this vote, Montanans have provided much needed leadership on this important issue, much as we did 100 years ago with the passage of the Corrupt Practices Act.”

Scare tactics FAIL: Mailer sent to all residents of Mansfield, paid for by the American Petroleum Institute, as noted above the address.

Elsewhere in Ohio and Pennsylvania, three communities fed up with a wealthy minority scaring people to vote against their own interests challenged the entire structure of law that puts corporate interest before residents—and won.

Mansfield, Ohio’s 50,000 residents were slated to be on the receiving end of Pennsylvania’s toxic frackwater waste, a byproduct of hydraulic fracturing, one of the dirtiest energy production methods in the US.

Under the law, there wasn’t really anything that concerned residents could do to stop it from coming. The permits are approved by the State, and the dumping of PA’s unwanted fracking chemicals into “injection wells” in Ohio is legal, despite the scientific evidence that storing frack waste is causing large earthquakes….in Ohio (that’s right…Ohio). 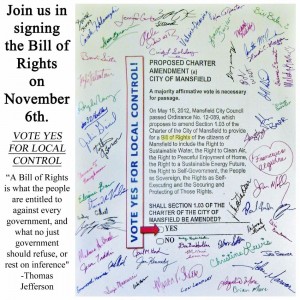 Mansfield residents respond to corporate elections ads with their own message

After an initial conference call with the Community Environmental Legal Defense Fund, and follow-up conversations with community members and the Council, the Law Director John Spon proposed a rights-based charter amendment.

Suddenly, a matter of local concern—namely the right of residents to protect their own health safety and welfare from ultra-hazardous materials—became an election issue for Big Petroleum and their PACs.

Corporate contributors poured over $300,000 into TV attack ads and glossy mailers to frighten residents into voting against their own interests, citing that the Charter Amendment Bill of Rights was a “jobs killer”. Residents didn’t believe the hype, reasoning that jobs related to injection wells are not as plentiful as promised, and dumping toxic waste into Mansfield’s industrial park seemed more likely to chase away new business.

As the Mayor put it “We don’t like out-siders telling us what to do.” Residents voted by 63% to pass the charter amendment that affirms the rights of all residents to decide if injections wells are wanted (they’re not); subordinates all corporate protections (not just personhood) to community wishes, and recognizes rights for ecosystems to be free from toxic frackwater dumping.

Elsewhere in Ohio, the town of Broadview Heights similarly passed a Community Bill of Rights charter amendment to ban any new fracking, and new injection wells or disposal of “frack-water,” “brine “tailings,” or other waste products of the fracking process.  The organizing group, Mothers Against Drilling In Our Neighborhoods (MADION) took it another step further, proposing the community vote to ban injection wells, but to futher protect the rights of citizens by prohibiting all new gas and oil drilling, fracking and injection wells.

Unlike their neighbors in Mansfield, the Mayor was not in support of the rights-based effort, and the City Council threatened to pull the initiative from the ballot, thereby stripping residents of their right to even vote on the matter, which did not go down well with residents. MADION’s charter amendment garnered the support of the local newspaper, and with no funding whatsoever the Mad Mothers made their case—door to door. On election day, the rights-based initiative passed with an impressive 66% of the vote.

Whatever you might say about the citizen initiative process—whereby the electorate can collect signatures to put items of concern before residents for a local or statewide vote—in states that don’t allow for it, residents are left with very few options when their elected officials abandon them.

Pennsylvania is a ‘no citizen initiative’ state.There is only one thing communities can put up for a vote there—and that is whether or not to become a “home rule” municipality (in other states it’s also called a charter city), which allows them to change how decisions are made tin their community and opens the door for local citizen initiatives that can effectively amend their town’s charter.   For the majority of Pennsylvanians who do not live under Home Rule, when residents oppose a policy, they must persuade their elected officials to enact new laws—sometimes difficult in areas where the “Good Old Boys” network runs in partnership with the “corporate boys”, turning towns into  sacrifice zones for one corporate activity to the next. Its something more communities are working toward—more community decision-making by “going” Home Rule.

In Furguson, PA—already a  Home Rule township, the activity that seeks to turn their community into a sacrifice zone  is fracking, along with hundreds of other communities dotted along the enormous Marcellus Shale  Marcellus Shale that crosses six states.

Local citizens groups Groundswell and CRAFT (Community Rights Activism for Ferguson Township) put forward a referendum to amend the Ferguson Township Home Rule Charter to add a Community Bill of Rights that would ban fracking. The initiative passed—despite being heavily opposed by the mayor, the town manager, and the town solicitor, who support fracking.  But as Groundswell put it, its not just about fracking, “these initiatives amount to a challenge to existing structural law concerning local government and a revolution in the way we deal with issues concerning communities and our environment…We’re not stopping here. A world will exist with an economy, environment and democracy that thrive together.”

All of these victories represent more than meets the eye. In these places Election Day wasn’t about RED or BLUE, nor were they about issues like  Citizens United, corporate personhood or fracking. Not to wax too poetically, but in each of these places, Americans took a deep breath of ownership of their rights that allows us all to breathe more freely.  If Martin Luther King, Jr., Harriet Tubman and Sojourner Truth are to be believed our rights are worth the risks, sacrifices and the bigger struggles for freedoms that lie ahead. It’s why Susan B. Anthony took her action to vote—not just for herself—but for all women.  Its why the freedom riders took white knuckle journeys through dangerous roads.

Montana surely faces a response from the U.S. Supreme court. And when it happens, we must all recognize that their struggle for rights is also our own—together we must stand not just against corporate so-called “rights” but we must stand together for our right to govern.

Shannon Biggs is the Director of the Community Rights program at Global Exchange,  assisting communities confronted by corporate harms to enact binding laws that place the rights of communities and nature above the claimed legal “rights” of corporations.