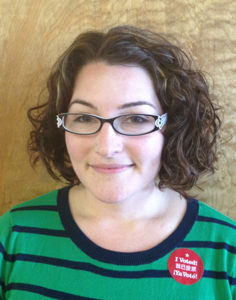 Global Exchange Elect Democracy campaigner Hillary Lehr, one of the many US voters who turned out on Nov. 7th to cast her ballot

Did you feel it too? A nervous anticipation hung in the Global Exchange office all day yesterday as we wondered what the outcome of the U.S. Election would be – the President, the Congress, the state level initiatives and of course our local resolutions.

Now that we have the results – who won? (Share your answer in the comments!)

Here’s how the Global Exchange team has interpreted some of the results:

Barack Obama
Yep, “Bronco Bama” won the presidency for a second term. Obama’s victory represents the rejection of a breathtakingly dishonest campaign by an American plutocrat who amassed a personal fortune using techniques described by his own Republican primary opponents as “vulture capitalism.” His disdain for the 47% he deemed unworthy of his care became legendary. Fear that Romney and Ryan would shred social security, turn back the clock on health care, shut the door on educational opportunity, and pursue reckless military adventures abroad sealed the deal for Obama despite a chillingly effective 11th hours attempt by the Romney campaign to “shake the etch-a-sketch” and redraw a compassionate candidate.

The contours of the President’s winning campaign were largely drawn, not by the Obama campaign but by the Occupy movement; which brought to the forefront what filmmaker Michael Moore called the “huge popular sentiment against what the wealthy have done” to our country. As President Obama himself said on Spanish language TV during the campaign: Change does not come from Washington, but from outside.” We hope the President will listen with open ears to the voices and harbingers of conscious and genuine change.

Obama’s re-election, along with a rejection of Tea Party stalwarts in key Senate races could signal opening of doors to bi-partisan solutions to looming issues such as the fiscal cliff designed by the lame duck congress. Nevertheless, Obama’s winning coalition brought together communities concerned with peace, immigration justice, women’s rights, drug policy reform, LGBTQI equality, affordable health care, and safeguarding democracy from moneyed interests – all issues that we must continue to push President Obama to champion now that election stumping is over.  We have a lot of work to do in the next four years.

Meanwhile, there were other ‘winners’ too which we will watch. We must continue to build movements to roll back the Bush era restrictions on civil liberties that Obama has embraced, people and planet-killing global trade policies, cruel and counter productive drone warfare, saber rattling with Iran, the absurd blockade against Cuba. And we must address climate change, which shamefully didn’t come from the candidates’ platforms until tragedy hit the east coast. 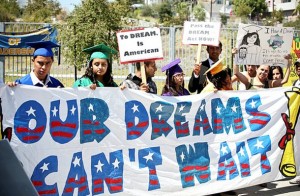 Immigration Justice
This past summer President Obama announced that the Administration would no longer seek to deport ‘DREAMers’ (young, undocumented immigrants who were brought to the US as children by their parents, have been in the US for at least five years, and are law abiding and willing to attend college or serve in the military), lifting the threat of deportation from nearly 1 million DREAMers and a step to make U.S. immigration system more fair and just. This was a step in the right direction and perhaps the only positive gesture Obama could make in the face of congressional opposition to humane immigration reforms. Nevertheless, the record rate of deportations during the Obama years and the continuing militarization of the U.S. border are alarming indicators that Obama needs to hear loudly and clearly from his base that the repression must stop.

Women’s Rights
Voters chose to elect the highest number of women to Congress in history and rejected 4 House and Senate candidates who had openly defended limiting a woman’s right to choose even in cases of rape. Missouri Senator Claire McCaskill’s resounding defeat of Todd Akin (the Missouri congressman who notoriously said that ‘legitimate rape’ does not lead to pregnancy) should put an end that discussion. A women’s right to make her own choices about her bodies and health was sealed decades ago. It is good to see that even in conservative regions, the expression of extreme views like Akin’s and that of Indiana’s Mourdock spell political doom.

Drug Policy
Washington and Colorado both voted to regulate marijuana much like we do alcohol. Historically, actions at the state level were what spelled the beginning of the end for Prohibition in the 1930s. How these new laws work out in practice will be key to the prospects for further national and international efforts to replace prohibition with regulation as the most effective way to end the destruction of the seemingly endless drug war.

Voters in California passed Prop 34 which limits lifetime incarceration via the ‘three strikes’ law to violent or serious third offenses. This will lower California’s incarceration rate and will help limit the prison sentences of nonviolent drug offenders.

Voting Rights
Reports of voter intimidation, faulty machines, long lines, voter ID problems, and other forms of mismanagement and direct voter suppression broke in real time via social media and were framed as a major issue of democracy in crisis by media outlets. Had this been a closer election this could have led to a serious crisis. Thanks to the hard work of our friends at Video the Vote along with legal observer teams across the country, the effects of voter suppression were minimized. Nevertheless, we should support laws and practices that discourage voter disenfranchisement and suppression, including laws that disenfranchise ex-felons.

Affordable Health Care
New coverage for tens of thousands of Americans promised by “Obamacare” will not be snatched back on January 22, 2013, as Romney promised to do if elected.

Money in Politics
This election was the most expensive election ever. Estimates place the final tally past $5.8 billion. We need campaign finance reform to protect democracy, plain and simple. This election saw some wins for the biggest spenders, but not across the board: in Connecticut, a losing candidate spent $50 million on the campaign and still lost.

It turns out that voters really stuck it to Super PACs by making their own choices at the polls yesterday. While Super PACs undoubtedly influenced the election, they certainly didn’t buy it. Huffington Post’s Mark Blumenthal summarized it well this morning: “As it turns out, you can’t buy a different electorate, or a better candidate, no matter how much money you throw at it.” Super PACs will have to face the fact that for the nearly $700 million they inserted into influencing the election, there isn’t a whole lot to show for it.

Elizabeth Warren, the candidate who ran on the issue of Wall Street regulation, won a tough race against Republican incumbent Rick Scott in Massachusetts. Last session’s Republican-dominated Senate refused to appoint Warren at the head of the Consumer Financial Protections Bureau but the people, with their votes, have said they want money out of politics.

Super PACs continue to attempt to influence state elections by funneling millions to influence voter choices on propositions such as California’s Propositions 30 and 32 – initiatives to raise taxes on the wealthiest in order to fund schools and to prevent union dues being spent on political action. The PACs’ misinformation is dangerous and, in some cases, illegal. An unfolding scandal to watch is the $11 million of Koch-bros-tied money that was laundered into the California election.

Global Exchange will continue our fight to Elect Democracy by challenging money in politics, especially with corporate campaign contributions and lobbying. Prepare yourself to push back against Wall Street’s greed and get ready to take on Wall Street’s post-election influence strategy: lobbying.

Free Trade Agreements
The presidential debates passed the blame for the economic crisis on shipping jobs to China, while supporting unfair free trade agreements that create conditions for off-shoring of jobs. President Obama’s support for the next big monster-free-trade deal, the TransPacific Partnership (TPP) will remain unchanged. The TPP aims to link 13 countries in free trade commitments – many written by corporation and is described by Public Citizen’s Global Trade Watch as a “NAFTA on steroids.” This is definitely NOT the direction we should be going to create jobs in the U.S. nor to ensure the economic safety and well-being of other countries.

Stick with Global Exchange to continue the call for fair trade, not free trade, so take action to shut down this dangerous trade deal. The election busted this issue wide open, now is the time to challenge unfair trade agreements out of the corporate back rooms. Starting on December 1st we will join thousands of others calling for a People’s Round in the TPP.

End the Blockade Against Cuba
Enacted in 1962 during the Kennedy administration the economic, social, and political blockade (El Bloqueo) has long outlived its supposed usefulness. Year after year U.S. government officials have developed new formats for strengthening the blockade and preventing two countries that have a shared history – and are only geographically 90 miles apart – from having normal political and economic relations.

President Obama loosened travel regulations for American citizens to travel to Cuba in the past Administration. Now, it’s time to end the blockade all together.

Drone Warfare and New (and ongoing) Wars
Drones built to kill must be stopped. As many as 3,000 people, including hundreds of noncombatants and even American citizens, have been killed in covert missions. The U.S. drone program has increased under the Obama Administration.

Iran. President Obama has given mixed and often nuanced messages on the U.S. position towards Iran. There must be peace with Iran, we simply can’t afford new wars and we must end the ones in which the U.S. has a continued presence.

Our friends at CODEPINK have launched Drones Watch, a coalition to monitor and regulate drone use. Start today by adding your name to this petition.

Climate Change: An Election Issue After All
Hurricane Sandy may have been an ironic October surprise for the election, but the consequences are enormous. Climate change and its related increasingly severe storms disproportionately impact poor communities and countries. Our thoughts are with Hurricane Sandy impacted communities in Cuba, Haiti and across the U.S. East Coast. Climate change and weather systems know no borders, and this wake-up call did indeed impact the election and the climate paradigm of U.S. voters. While it is technical ‘win’ that a “drill-baby-drill” candidate isn’t in the White House we must be prepared to push harder than ever to make President Obama take the real action to address climate change, including stopping the Keystone XL pipeline which he acknowledged in the second presidential debate a few weeks before the hurricane. This is one of the primary issues we must act on immediately for real and lasting change (and this does not mean increasing natural gas extraction by fracking.)

All in all, we’re encouraged by the results of a decisive election and like NPR, we’re sorry that the little red-headed kid was so exasperated by the election cycle. Nonetheless, voting is one of several essential tools for change-making. Participating in our elections (no matter how beleaguered and imperfect they may be) indicates strong values of respect, compassion, and integrity – the foundation of a healthy democracy (plus you get free stuff with your ‘I Voted!’ stickers).

But, while you may be celebrating, don’t let your guard down. A lot of angry corporations and rich folks woke up on November 7th and plan to fight harder than ever to protect their profits at all costs. If you are like me, you went home early last night, realized that there is much to do, woke up this morning, and got back to work.

What can you do? Join us and host a home screening of the award winning documentary “Heist: Who Stole the American Dream” and then set up a meeting with your Congressperson who will be home in December to call out the problems of Wall Street campaign contributions and lobbying. Find out more here.