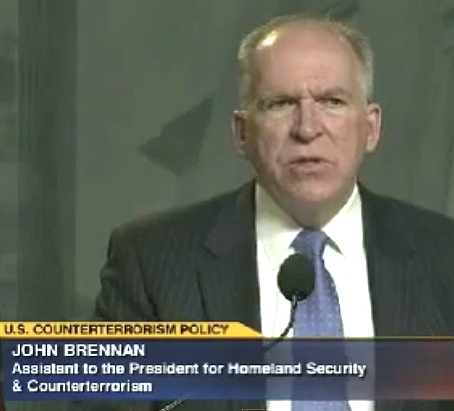 Having recently returned from Pakistan meeting with drone victims, on November 4 my partner Tighe Barry and I were having a leisurely Sunday morning breakfast. The discussion turned to John Brennan, Obama’s counterterrorism chief and the key person making decisions about drone strikes. We wondered if Brennan ever had a chance to meet innocent drone victims, as we did, and feel their pain. 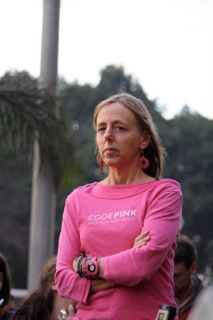 “Maybe we should go to his house and talk to him,” quipped Tighe. We laughed at the absurdity of the idea but decided to do a little bit of research. Fifteen minutes later, we were out the door, driving to a Virginia suburb an hour south of Washington DC. I had no idea if it was really John’s address, but it was a lovely day for a drive—and Tighe was willing to indulge me.

Exiting the freeway, we came to an area of rolling hills, green grass and private horse farms. As we approached what we thought might be John Brennan’s street, we were sure it was a mistake. How could this be? It was a nondescript upper middle class neighborhood, with children playing in the yards—no security, no government vehicles. The house was in a cul-de-sac sandwiched between two other houses, without so much as a fence surrounding it.

I decided to go knock on the door to make sure we were wrong.  A middle-aged, white-haired guy in a casual sweater and jeans opened the door, accompanied by someone who l assumed was his wife.

Could this really be John Brennan? The same man who championed “enhanced interrogation techniques” under President Bush? The same man who now decides, on “terror Tuesdays”, who will be on the CIA kill list? The guy who developed the Orwellian “disposition matrix”—a blueprint for disposing of terrorist suspects for at least another decade?

I hesitated. He looked much younger and thinner than I remembered, and he looked like such a nice man. And would someone who spent his career in the CIA and was the nation’s counterterrorism czar be answering his own door?

“John?,” I asked. “Yes,” he replied tentatively. I continued, still doubting that he was really John Brennan. “I’m sorry to bother you at your home on a Sunday, but I wanted to talk to you about a recent trip.”

“A trip?”, he asked, squinting his eyes and cocking his head to the side. “A trip to where?” “Pakistan,” I answered. “Ohhhhh,” he said.

What he really meant was, “Oh shit.” For it was at that moment I realized he was indeed John Brennan, and he realized that I knew exactly who he was.

“How did you know where I live?,” the spy-extraordinaire asked. I was suddenly nervous, knowing this was a man who put people on kill lists. Thinking quickly, I told him I had friends in the neighborhood who gave me his address.

He asked for a business card, and I ran back to get one from the car—where Tighe was waiting. We exchange looks, OMG!

When I went back and handed the card to Brennan, he glanced at it and muttered, “Ah, CODEPINK. I thought that’s who you were.” The last time we met I was being dragged out of the Woodrow Wilson Center by a 300-pound security man while yelling “I love my country! You’re making us less safe. Shame on you Mr. Brennan.”

I knew I didn’t have much time so I start(ed) talking fast—telling him I had just returned from a delegation to Pakistan meeting with drone victims, how heartbroken I was to hear their stories, how terrible it is that these drone attacks are causing so much suffering to innocent people and turning the entire Pakistani population against us.

He insisted that it wasn’t true, that we weren’t harming civilians. “But we met with people who lost their children, their fathers, their loved ones—we have photos of little children….” I wanted to say so much more. I wanted to tell him about the journalist Karim Khan who lost his son and brother or about 16-year-old Tariq Aziz, who was killed when trying to document drone strikes. I wanted to talk to him about the statistics provided by the Bureau of Investigative Journalism that say conservative estimates of civilian casualties add up over 1,000.

“It’s just not true,” he repeated, dismissively. “You are being manipulated.”

By this time, the woman who joined him at the door had become very agitated. “You shouldn’t be coming to our house on a Sunday. We rarely get to see him as it is. You should talk to him in an appropriate place.”

I pleaded. “I’ve tried many times to do that, but never receive a response.” I asked for a number where I could reach him to set up a meeting, but he refused. “I have your information, I can reach you,” he claimed, waving my bright pink business card in the air.

Worried that he might be about to call in the police, or the CIA, or maybe even a drone, I finally desisted and thanked him for his time. “I want you to know, John, that I am doing this from my heart, because I care about the lives of innocent people everywhere and I care about our country.” With that, he slammed the door.
—
Medea Benjamin, Co-Director of Code Pink and Co-founder of Global Exchange, is author of Drone Warfare: Killing by Remote Control.