Why Stick It To Super PACs?

Sick of Super-PACs yet? I’m sure over the endless mailings, the ominous ads, the outright lies, and odious half-truths. When it seems to go from bad to worse, how do you know whom to trust?

You’re not crazy, it is getting worse.

Political campaigns have always involved a fair amount of mudslinging. But in the 2012 election, the amount of slinging and the quantities of mud have skyrocketed. According to MapLight analysis, twenty-one Super PACs have raised over $433 million to spend influencing the election. Think of it as 433 million more giant barrels of mud drowning our election in corporate political speech.

This is not what a healthy democracy looks like.

So What Exactly Is a Super PAC, anyway?

Super PACs are a new kind of political action committee enabled by the infamous January 2010 Citizens United ruling by the Supreme Court and a subsequent federal court case in July 2010.

Formally known as “independent expenditure-only committees,” Super PACs can raise unlimited amounts of money from corporations, unions, certain nonprofits, or individuals, and can then spend unlimited sums to support or oppose political candidates so long as they don’t ‘coordinate’ with the candidate’s campaign. Unlike traditional Political Action Committees, which would donate capped amounts of money to candidates, Super PAC money is simply not funneled to a candidate, enabling the Super PACs to spend unlimited dollars to buy influence over our election. 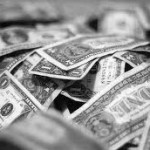 Record spending enabled through Super PACs most significantly benefits those with the most to spend and the most to gain: the corporate interests willing to spend tens of millions to get candidates in office that allow their greed to go unregulated. According to Campaign Legal Center, only a small top percentage of donors to Super PACs contribute a majority of their total funds. This corporate political speech is overpowering the voices of everybody else in this democracy.

Super PACs are Drowning Out Democracy, so What Can We Do About It?

Thousands of people are organizing to challenge the crisis in which Super PACs have placed our democracy. The solutions proposed range from campaign finance reform bills in Congress to constitutional amendments to local ordinances that prioritize community rights and decision-making. While all exciting, these victories could take years. Defending democracy means sticking with it for the long haul.

In the meantime, let’s get a big, collective “HELL NO!!!” on the record. After all, we are in the final days of the election season, and these are the moments where Super PACs are spending the most (literally tens of thousands of dollars per second) to influence your vote. So, since Super PACs are making democracy hard for us, let’s take a moment and making life hard for them, even if just for one day:

STICK IT TO SUPER PACS!

On October 25th, over a dozen organizations are partnering with Global Exchange to launch www.StickItToSuperPACs.org, a day-long action where you can tell the top-spending Super PACs exactly what you think about them. Visit the site today to Get Stickin’ and join the flood of emails, phone calls, Facebook posts, and Tweets to Super PACs that gives you, the voter, a chance to tell corporate dollars to get out of the way of democracy. Imagine your computer mouse transformed into a proverbial wrench, and then toss it into the gears of Super PACs that are drowning out everything except big-money corporate speech.

It’s not going to solve all our problems, but believe me, when I hit “send” on my letter to the top 5 Super PAC inboxes, I was happy I got to #StickItToSuperPACs today.  Sometimes it’s the little ways we take action to demand elections, not auctions, that will create momentum to usher in long term change down the line, so join me and get stickin’!

• Stick It To Super PACs: Visit our web page to call, email, post, and/or tweet your dissent straight to the Top 5 Super PACs. 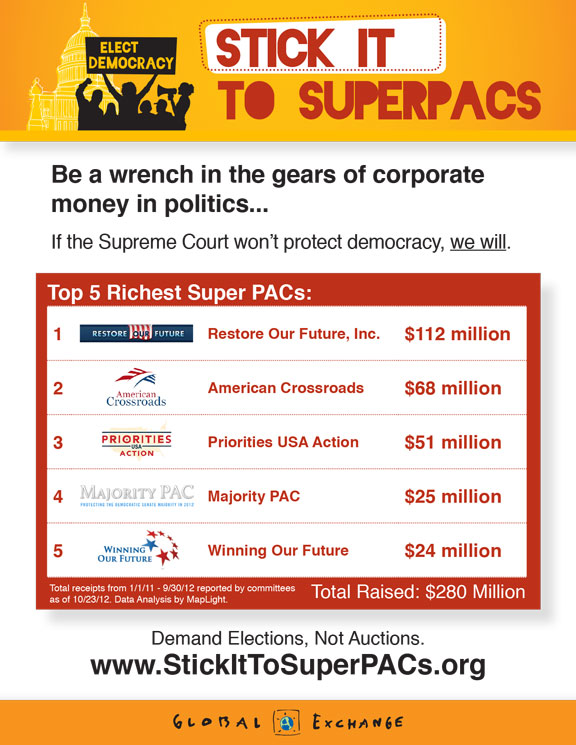 Elect Democracy, a Global Exchange campaign, is a nonpartisan effort to expose and challenge the impact of corporate money in politics. The campaign focuses on the impact of political campaign contributions and lobbying from Wall Street and its impacts for civil society.