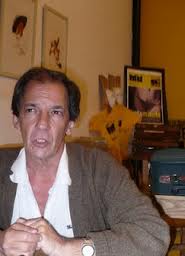 Today we feature an interview with Sergio Ciancaglini, from La Vaca cooperative.  For the past decade Global Exchange Reality Tours have included La Vaca on our rich educational itineraries. Learn about the work and mission of La Vaca in this two part interview series conducted by our summer assistant Kathleen Reynolds.

Kathleen: Perhaps we can begin with a brief history of how La Vaca began and your work with La Vaca?

Sergio: La Vaca is a work cooperative that was born in the year 2001, which was a time of much crisis in Argentina where money disappeared and there were lots of social movements that had to take responsibility of their own life. They had to take on the responsibility to invent work and survival. In this year 2001, is when the La Vaca began as an information agency through Internet – it was one the first of its kind in Argentina that tried to reflect this new universe of actions we saw in large quantities of social experiences. From that moment, for example, we published on the Internet our reporting, our articles and later we began to work on books.

Our first book was, Sin Patron.  Sin Patron is about the recuperated factories in Argentina and it is available in the US. We presented it in Counter Union in New York with Naomi Klein and Avi Lewis. It is book that is written originally in Castellano Spanish by us, but later more versions were printed in English in the US, Italian and later in Portuguese in Brazil. We then wrote seven more books and the latest one is Argentina Originara. It is a book about native peoples of Argentina. With the passing of time, we started a newspaper, a monthly magazine called MU, which is a magazine published every month that we started five and half years ago. Out of the roots of the work we do, each piece of work gives us a new idea. From the work we had been doing, it occurred to us to do a radio program. You can listen to it via Internet at www.lavaca.org. It is a radio program that is broadcasted on 109 radios throughout Argentina. It is broadcasted through all university, community and local radio stations throughout the country.

It is a program created as an alternative form of social media and it is important to say that like many other commercial radio stations, this radio program also reaches all areas of the country. We do training courses for department chairs universities and high schools on social autonomy and we have a cultural center that is also a bar called MU Punto Encuentro Buenos Aires where there are conferences and sell leading independent editorial books. Here in Argentina, we drink el mate, our typical drink. Here it is made with herbs from cooperatives that are not sold in traditional supermarkets. The entire project of La Vaca is work of communication, of culture, of cooperativism and social economics.

Kathleen: What is the work you do in the cooperative and how did you begin to work with La Vaca?

Sergio: I have been a journalist for many years. I have always worked on the topics of human rights. For example, I covered the trials on the military junta in 1985, which was the first time in the democracy it was possible to try people who had raped, tortured and killed during the dictatorship. I have always worked with the most important media in Argentina for example, the newspaper Diaro Clarín, the newspaper la Razón and the newspaper Página Doce,… I worked as editor and reactor. In the year 2001, the experience of La Vaca began with all the people who were around me and so I joined. Now I work writing many articles of the monthly MU magazine. At the same time, I run the radio program that is broadcasted on 109 radios around the country and I am the President of the cooperative.

Thank you Sergio for the years of effort and energy that you have put into organizing La Vaca and welcoming our Reality Tours delegates to La Vaca and  Argentina!  Next week we will delve further into the power of those exchanges.

Experience for yourself: Join our “Building Economic Justice from Below” trip this November and learn more about the 200 ‘recovered’ co-operative factories in Argentina.