“For my people, the forest is sacred, it is life in all its essence. We can protect Pachamama only if this is respected. REDD and other market-based mechanisms have turned our relationship with forests into a business”
– Marlon Santi, leader of the Sarayaku Quichua community of Ecuador

REDD (Reducing Emissions from Deforestation and Degradation) is a controversial carbon trading scheme that California is about to implement as a way to reduce the state’s global emissions that will impact forest communities in Mexico, Brazil and elsewhere.

On October 16th, a panel of Indigenous activists from Chiapas, Mexico, Pastaza province, Ecuador and Acre, Brazil, convened at the David Brower Center in Berkeley, CA for a discussion on the affects of REDD on their communities and ways of life. I had the opportunity to attend the panel discussion and screening of the film The Darker Shade of Green, which is part of a week-long tour through the state organized by the Indigenous Environmental Network (IEN). The tour aims to educate Californians on the negative impacts the implementation of REDD by California will have on communities in places like Chiapas, Mexico and throughout South America.

REDD, also called REDD+, is a controversial market-based carbon trading scheme which gives countries the ability to ‘pay’ developing countries to conserve their forests instead of cutting them down or allowing them to be logged. This ‘conservation’ allows the country/state purchasing the credits to reduce their count of global emissions—at least on paper—arguing that their polluting practices have been counter-balanced by preventing resource use in other countries. A key question is—have emissions been reduced, or merely moved around? REDD was first put forward as a United Nations program at the COP15 climate talks in Copenhagen back in 2009. Taken at first glance, the idea of “reducing emissions from deforestation” sounds appealing but when we unpack the ideas behind REDD there is more than meets the eye.

REDD is particularly controversial amongst forest peoples in Indigenous communities, who are often the frontline defenders of forests. Some welcome REDD, seeing it as a way to be paid to protect forests but more believe that it fundamentally alters Indigenous peoples’ relationship with the land and living in harmony with nature. As moderator of the event, IEN’s Tom B.K. Goldtooth said REDD “criminalizes peoples who protect and rely on forests for their livelihood and is promoting the biggest land grab of all time and may result in genocide”.

This system of carbon trading carbon not only makes industrial pollution and CO2 emissions by wealthy countries ‘acceptable’ but it also dictates what forest peoples in the Global South can do with land. Indigenous peoples especially are bearing the weight of these policies through land grabs, forced relocation, and government cutting off crucial services such as healthcare and education as a way of threatening them to relocate from their native lands.

The need for unified resistance

I was captivated by the first-hand experience of the panelists and the effects that REDD has had on their lives and communities. With a quiet dignity, Gloria Ushiga of the Association of Zapara women in Ecuador spoke about being persecuted and facing death threats for her outspoken opposition to REDD. Rosario Aguilar from Chiapas spoke about her experience witnessing healthcare services being cut to Indigenous communities that refuse to relocate from their lands. Marlon Santi of the Sarayaku in Ecuador spoke about the effects of ‘Socio Bosque’ (the “Social Forest”) – Ecuador’s national policy of privatizing lands to make way for REDD programs. 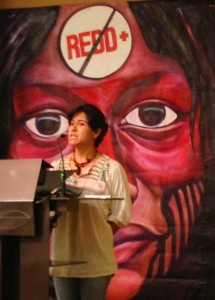 There was one clear message throughout the evening: the struggle against REDD must be a united one – combining the efforts of both Indigenous and non-Indigenous peoples of the Global North and South.

California is currently poised to adopt legislation AB32  (The Global Warming Solutions Act), a statewide mandate for reducing greenhouse gas emissions via carbon trading. If the law is passed next year, it has the potential to set the stage for how other countries will implement compliance with REDD. If REDD is implemented in California, it will not do anything to help reduce California’s global emissions. Rather, it will rely on carbon offsets from places like Chiapas, Mexico and Acre, Brazil to allow California corporations to continue to pollute.

Alberto Saldamando, Indigenous Environmental Network campaigner on California REDD has said the following about the possibility of California adopting REDD:

“The abuses of indigenous human rights by cap and trade, particularly under REDD programs have been well documented. They have led to forced or coerced displacement of Indigenous Peoples from their ancestral lands, assassinations, imprisonment, and alienation from Indigenous lifeways and spiritual lives. California should not repeat its mistakes of the past with regard to Indigenous and Native Peoples, including their genocide or ethnocide, just to let their polluters continue to pollute.” 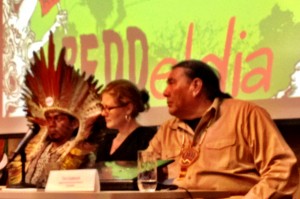 From left to right: Ninawa, President of the Federation of Huni Kui (Acre Brazil, translator, and panel moderator Tom B.K. Goldtooth of IEN

The panelists all made the point that the resistance to REDD in California must be as strong and determined as the resistance to REDD in the Global South. When California industry is allowed to pollute more it affects California communities. We must ask ourselves, for instance, how much more pollution and toxic contamination from the Chevron Refinery can residents in Richmond, CA take? With REDD, communities like Richmond will continue to serve as sacrifice zones for industry.

By claiming to curb climate change through putting a price tag on nature, we are further commoditizing forests rather than tackling the root causes of deforestation, climate change, and environmental destruction. If capitalism got us into this environmental crisis, how can we expect it to get us out?

The answer is, we can’t.

Can we protect nature as long as we treat the Earth as a resource for profit?

At the end of the panel discussion there was some time left for questions and comments from the audience. I stood up and took a few moments to speak about Rights of Nature as path forward which rejects REDD and other market-based schemes that push nature further into the marketplace.

Demonstrated by the passion of the presenters, the negative impacts on all of our communities can be so overwhelming sometimes that we lose sight of the alternatives, and what we are truly for.  We must make the transition toward living within the carrying capacity of the planet. The international movement for Rights of Nature has immense potential to take humanity in a positive direction towards protecting the planet by changing law to recognize that nature itself has inherent rights to exist, thrive, and regenerate. From there, local communities can act as stewards of their local environment and build resilient local economies that do not depend on the commodification of nature.

Rights of Nature is the alternative framework we need to truly protect the environment, without price tags.