In the past two weeks, Tampa and Charlotte have been three times hotter than usual:

–Street Heat: marches and protests demanding accountability and justice.
–Cop Heat: more militarized ‘free speech zones’ than I’ve ever seen before, ever, all at once.
–Wall Street Heat: lobbyists and campaign money burning democracy as usual. 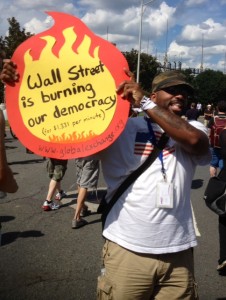 Street Heat
“What a field day for the heat… a thousand people in the street… singing songs and carrying signs.” –Buffalo Springfield

Well, forty years later, the song strikes a chord- what a hot field day indeed! About a thousand protesters attended Charlotte’s March on Wall Street South on Sunday and several hundred others braved weather from Hurricane Isaac in Tampa to be heard at the conventions for the two major parties.

Of all the myriad problematic issues that impact communities of people living in the U.S., a common cry for money out of politics was loud and clear. It seems more evident than ever that the plutocracy of rule by the 1% is unsustainble for our communities and our planet. Protestors are calling for an end to greed and business as usual and a change in how people relate to each other: respect, mutual support, and peace.

United by both our unique differences and our shared determination to be heard and to create a better world, we spent our time marching and learning from one another and shared strategies of what’s working around the country in our efforts to build resilience. Our demands aren’t selfish or unreasonable; they are practical for the survival and health of this country. 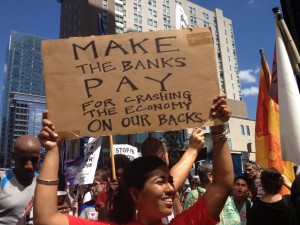 Well, we made important demands from within our ‘free speech zones’ that is. The police presence was ‘over the top’ in the opinion of a passerby flight attendant who watched the march from downtown. I must say I agree.

Something about a rightfully-angered civil society provokes an increasingly militarized response, but this cordoning off of protest to small ‘free speech zones’ and martial-law style patrolled parades diminish the visibility – in fact it invisibilizes – the many passionate cries for justice that should be heard in any healthy democracy.

Though apparently trying to keep a lower-than-usual profile, lobbyist-hosted soirees sure do attract the rapt attention of delegates, but what about the rest of us?  With Charlotte and Tampa both spending over $50 million in taxpayer dollars on ‘security’, it became clear that suppressing citizens from peacefully voicing legitimate concerns about the political process is very much a focus of this ‘security’ spending. P.S. Arresting peaceful environmental activists and using exorbitantly high bail to keep people behind bars instead of organizing? Not so cool, Charlotte P.D. Not so cool. 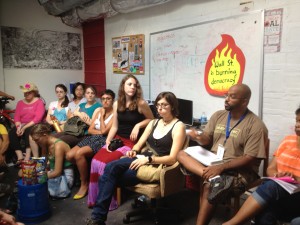 While far far away on the West Coast, artists were burning a wooden replica of Wall Street, I was in Tampa and Charlotte giving workshops on how Wall Street was Burning Democracy. From homeless activists in Tampa’s Romneyville to schoolteachers who came to protest in Charlotte, it’s very clear that every single one of us can see how our communities are suffering when Wall Street uses it’s undue influence through record spending on elections to make policies in Washington keep up Wall Street’s profits at the expense of the rest of the country.

Our workshops focused on breaking out into groups so that we all had space to discuss in-depth how Wall Street impacts our lives AND to share how people are standing up to reclaim and protect democracy and their communities. It was a great opportunity to gather activists from all over the country to share, support, and strategize. We also found great potential hosts for October’s “Don’t Burn Democracy” BBQ events! Don’t forget to apply by September 15. The fact of the matter is that things are getting worse… but our resilience is getting stronger. The national dialogue and framing has shifted to include language about the 99%, about corporate greed and it’s consequences, and about what needs to change. We are making a difference, it just isn’t going to happen as fast as a burger pops out a drive-through window. Change takes time… and it takes all of us.

Let’s Put Out the Fire!! 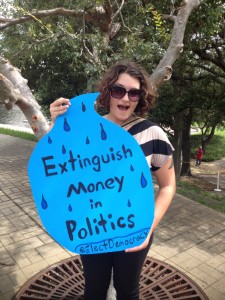 The odds may feel slim, but don’t get burnt out- we can still make a difference. Even though it was hot hot hot, it was pretty darn cool to see so many people who are active in making change all around the country. From resisting foreclosures to fighting for accessible education, (im)migrant rights, and peace, we have a lot of friends with lots of common dreams. More and more of us are fighting to make those dreams real.

We see a small slice of that outside the RNC and the DNC, check out Global Exchange’s photo album to see everyone’s inspiring messages and demands! And we saw a lot of media listening.

No matter where you are or what you are doing, more people are listening than ever. Get out there and be heard! If money in politics is your pet peeve (it’s mine!) than use our legislative scorecard (most recently covered in the Huffington Post!) to find out how much Wall Street money your Senator or Representative received… and like Virginia Lee in Salt Lake City, write an op-ed about it if you want things to be different. Thanks again for everything you do, and thanks to all of the members of Global Exchange who helped me get to Tampa and Charlotte to organize and contribute to our movements for justice!