In our recent report: “Meet the F.I.R.E. Sector: How Wall Street is Burning Democracy,” Global Exchange examined Senate and House voting records for seven bills for which Wall Street put in a significant lobby in order to influence Congressional votes. Based on how often legislators’ votes matched the Finance, Insurance, and Real Estate sector’s lobby positions, we were able to calculate an “industry loyalty rate” for each Senator and Representative.

So… what do you think Paul Ryan’s industry loyalty rate was in our Legislative Scorecard?

According to data from MapLight and Center for Responsive Politics, Paul Ryan also accepted over $3.2 million in campaign contributions from the Finance, Insurance, and Real Estate sector for his Congressional races, a number that is now likely to go up- way up. 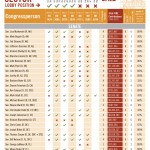 Find out how your representatives voted (and how much Wall Street $$ they received) in Elect Democracy’s recent report and legislative scorecard.