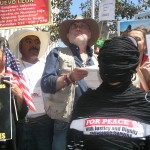 Javier Sicilia and fellow activists during Peace Caravan in L.A.

Who’s behind the Caravan? The Movement for Peace with Justice and Dignity and Global Exchange are proud to partner with a broad, growing coalition of groups dedicated to changing our national debate on the Drug War.

More than 80 victims of Mexico’s drug war who traveled across the US/Mexico border to take part in the Caravan have been joined by others (including some Global Exchange staff and interns) north of the border to urge the U.S. public to rethink the failed strategies of the war on drugs. Victims of the violence in Mexico are speaking at stops along the way, to share their testimonies of suffering and courage. 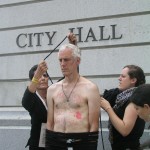 John Lindsay-Poland of Fellowship of the Reconciliation getting tied up during action in front of L.A. city hall.

Global Exchange’s Zarah Patriana who is in LA with the Caravan described the scene today; “The weather continues to be hot, but the caravan marches on!”

Caravan participants gathered at City Hall for a portion of the day’s ‘s activities. A handful of activists including GX friend John Lindsay-Poland of Fellowship of the Reconciliation got tied up for an action in front of city hall representing the number of people who have disappeared — desaparecidos.

Earlier in the morning the L.A. City Council passed a resolution supporting the Caravana. 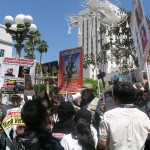 There has been a ton of press coverage for the Caravan thus far. Here’s just a sampling:

This Soundcloud audio clip from KPFA 94.1-FM in Berkeley is a great listen! Victims of US/Mexico Drug War Lead Caravan for Peace 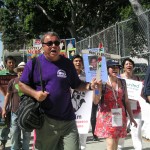 Lend Your Support: Donations are still being accepted to help fund this important trip. Will you give?