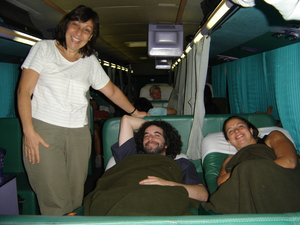 Delia and Delegates in Argentina

In the first of a two part series, Delia shares with us in an interview conducted by our intern Kathleen Reynolds, the significance of the 2001 financial crisis and what lessons it provides for us today.

Kathleen: Can you explain the significance of the 2001 financial crisis in Argentina?  Grassroots worker-run cooperatives radically changed the debate. How did they shift the focus from the cost of labor to the cost of owners? 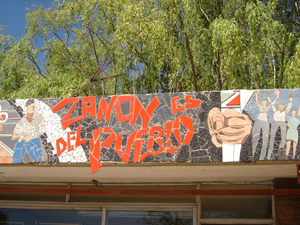 Recuperated Factories, “of the People”, 2003

Delia: Well I’m sure you are aware that in the end of 2001 the whole economy in Argentina collapsed. It was a true collapse in the sense that nothing was working. There was literally no more money. There was no pay, there were only empty promises. Different provinces in Argentina which are like states here (in the U.S.) started to make their own currency. There was no credit for individuals or for businesses.

Business works on credit. There was no credit to be had. Nothing. The banks literally closed. These are banks like Citibank, Bank of Boston… Supposedly they all had the backing of the United States, not so. When the time came they simply closed and that was devastating for everybody. It was impossible to do anything so people took to the streets!

At that point there was a lot of political turmoil. I think there were four central governments that wanted to default. It was a total collapse. People could not even withdraw their own money from the bank because the banks were all closed. Some people were banging literally with hammers, banging on the closed doors of the banks. Everybody took to the streets. People were trying to get anything that they could get their hands on to make noise, pots and pans, banging with their hands, just making noise and saying the words everybody needs to go!  Everybody meant everybody politically. 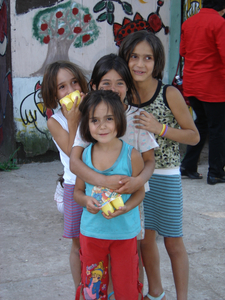 When people realized that their place of work wouldn’t even give them the promise of payment they began to rise up. Bankruptcy was widespread. Workers recognized that they were not going to be able to do anything to feed their families. That’s when they began to realize that they needed to find a solution for themselves.

The solution did not depend on the big picture, not on the politicians, the rules, the laws or the economic situation. It was a local issue. It was the smaller community that needed to come together. We had the movements and the assemblies, which were simply people that were meeting on the street corner trying to figure out how to help one another in the smallest sense of the neighborhood. They were called neighborhood assemblies and some of them organized broader markets in the work place.

Workers realized that they were still there, the machinery was still there, only the bosses were missing because they had declared bankruptcy. They were gone. So people decided to keep the shop open. And that’s when they started to do this movement that was later called recuperated factories, recuperated from bankruptcy.  But that wasn’t so easy because of the police of course. People were literally occupying their workplaces. The word “occupy” now has a different meaning.

In Argentina, people were simply saying ok we’re going to stay. We are not going to allow our bosses to take away the machinery to sell it out. We are going to keep and protect the machinery as well as the work place and we are going to keep it going. Of course at first they realized, wait a moment we don’t know anything about administration because the administration was in the hands of the bosses. That’s when the whole society somehow found a way to come together. Students from the university of economics came around and taught the workers how to keep the books and they realized that they could run this themselves. There’s no magic in management. We can manage ourselves. We can do it. And that’s when they decided, we can keep on going, and we really don’t need the bosses. 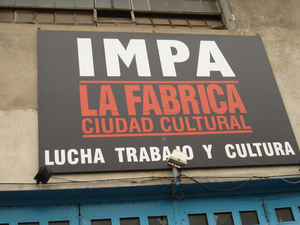 The big advantage was that suddenly all of  the surplus that usually went to pay the higher salaries of the management was brought back into the factories as actual production. Now I think there are about 300 occupied factories still functioning.

Factory is not the proper word. It’s workplaces. (There are many different types of businesses;) cooperative hotels, clinics, and alll kinds of factories. For instance, one of them is a hotel where we stay with Reality Tours. We had the firsthand experience of seeing how it’s run. It’s a big hotel in the middle of town. Of course there was no guarantee but it all came together in a very positive way.

Some (groups) like La Vacca, the journalism cooperative that we work with, started to regroup. They began to form networks so that cooperatives could organize and buy from one another. One of the things I find very interesting is going back to visit some of these places, I can see the progress. It’s incredible to see how things evolved. In some instances people wanted to maintain a true horizontal management or decision-making process. Decisions are made by consensus. Other people decided that it was too time consuming and they selected representatives to form a commission. The commission would make day-to-day decisions, consulting only now and then with the full assembly.

They all have pros and cons. It’s very interesting to talk with different people about their experiences. For instance people who organized committees said that it was amazing how very soon afterwards there were marked differences.

Thank you Delia for the years of effort and energy that you have put into organizing and facilitating our Reality Tours to Argentina!

Experience for yourself: Join our “Building Economic Justice from Below” trip this November and learn more about the 200 ‘recovered’ co-operative factories in Argentina.