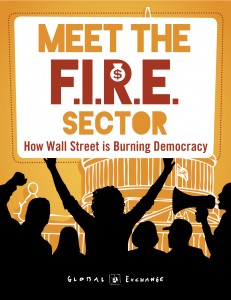 How much is democracy worth to you?

According to Wall Street, it’s worth approximately $4.2 billion. That’s how much the Finance, Insurance, and Real Estate (FIRE) sector has invested in political influence via campaign contributions and lobbying over the past six years.

That’s $1,331 dollars spent every minute since 2006 to buy political influence.

Using our new legislative scorecard from the report, you can trace how legislators from your district voted on key issues such as the bank bailout, Wall Street reform, free trade agreements and more. Not only that, but you can also see for yourself how much money they received in campaign contributions from the F.I.R.E. sector, and their ‘industry loyalty voting rate.’

There are many complex factors that impact how legislators vote, but corporate sponsorships shouldn’t be one of them.

It is up to us to reclaim and protect democracy.

Knowing is half the battle. So please, help us spread the word. Use the Facebook and Twitter buttons to forward this legislative scorecard to family and friends. Ask them to take a look and let the numbers speak for themselves.

Remember, we’re not telling you who to vote for. We’re asking you to follow the money. Our goals are not to influence the outcome of one election, but to spark dialogue about accountability & transparency, and stop Wall Street from burning our priceless democracy. 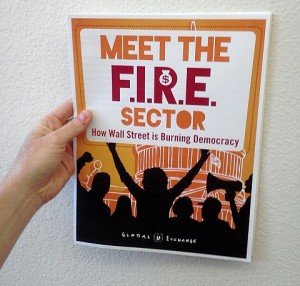