“In a political atmosphere dominated by corporate speech, corporate interests, and corporate-contribution-dependent politicians, how can we reclaim the real ability to Elect Democracy?”

Last week, we were honored to host a panel with speakers from Code Pink, Oil Change International, and Public Citizen at the legendary Busboys and Poets in Washington DC.

The speakers joined Global Exchange to compare notes on how undue corporate influence impacts the ability of these groups to carry out their positive missions, and share inspiration about how people are standing up to protect and reclaim democracy.

Global Exchange convened a dedicated group of activists and members to strategize about challenging corporate money in politics beyond the issue silo in which our organizations often carry out much of our work.

By speaking openly and sharing stories, we can collectively gain a more full understanding of two things: a) what’s at stake with the increasingly corporate-dominated political atmosphere and b) what’s working to take the power back.

One new tool we’re excited to share with you is our just-released legislative scorecard.

Since the Elect Democracy campaign is focused on getting the F.I.R.E. money out of our democracy, we conducted extensive research to show how members of the Senate Banking, Senate Finance, and House Finance committees voted on key issues such as the bailout, Wall Street reform, healthcare, credit card regulation, and free trade.

We compiled not only an easy-to-reference voting record, but also included data that traces how much F.I.R.E money each Congressperson received in campaign contributions, and a percentage rate to the F.I.R.E sector lobby on each bill. It is stunning to see just how much money Wall Street is pumping into our political system. How much money are committee  legislators from your district taking from the F.I.R.E. sector? Find out. 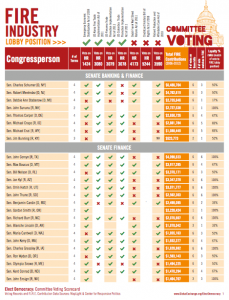 During the panel, each of our speakers shared some of the raw numbers of corporate campaign donations and lobbying coming  from the F.I.R.E. sector, war profiteers, AIPAC, oil companies, fossil fuel industries, and other sectors to foster an environment in which regulation and even plain legal accountability are difficult to achieve.

The speakers also discussed how the revolving door of industry insiders rotating into political office and back out into industry have become the new norm. A panel attendee from Occupy Monsanto gave another example of revolving door politics in the January 2012 appointment of former Monsanto vice president Michael Taylor to be Senior Advisor to the Commissioner of the Food and Drug Administration.

Though the stakes are high and the corporate pockets deep, there are still many forms of resistance bubbling up all over the country.

Dozens of groups will be mobilizing at the upcoming conventions and other events to challenge corporate ‘sponsorship’ of Congress. Through organizing protests, boycotts, days of action, and non-violent direct action, organizers are taking strong, collective action to confront and stop everything from foreclosure evictions to fossil fuel subsidies.

This increasing rancor has significant political ramifications during and beyond election season.  Several states (including California) along with dozens of towns, cities, and counties are standing up in favor of a constitutional amendment to overturn the Citizens United Supreme Court ruling and perhaps extend an amendment to further curb corporate abuse of our political system. That would be a good start!

Another lesson from the panel: it is increasingly important for our organizations to amplify our message and get our (shocking) facts and tools about money in politics as far out into the public sphere as we can. As the tentacles of greed squeeze tighter, the numbers of people ready to take action and stand up for real democracy increase proportionally. It’s going to be an exciting rest of the year.

Since we were in Washington DC, we decided to meet up with our friends from CODEPINK and do a mini ‘Reality Tour’ of Washington DC and follow the money around town. Below is a sampling of our photo album documenting what we found. 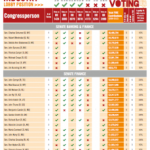 Note: Unfortunately, our panelist from 350.org couldn’t make it due to illness. Hope you feel better soon, Jason.

TAKE ACTION: Leave a comment or tweet to @ElectDemocracy about how much democracy is worth to you: be creative! There are no wrong answers except ones that start with a $….