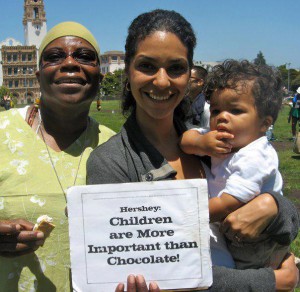 Global Exchange is taking the Raise the Bar campaign in a sweet direction with our “We Want More from our S’mores” campaign. We’re joining activists nationwide in calling on Hershey and the rest of the cocoa industry to END grinding poverty and abusive child labor in the cocoa fields…by making a statement with our s’mores!

Together our delicious s’mores will help raise awareness and hold Hershey accountable for failing to eliminate child and forced labor from its supply chain and encourage the company to achieve Fair Trade certification.

As part of this unique nationwide action, we’ve decided our goal is to register 1,000+ Fair Trade s’mores this summer. You can help, see below for details. 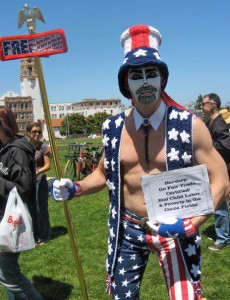 Over at the Global Exchange table, staff and volunteers were visited by about 50 adults and kids who stopped by to roast vegan marshmallows and make s’mores using Equal Exchange Fair Trade chocolate and organic graham crackers, and have their photos taken with signs urging Hershey to go Fair Trade and end forced child labor. 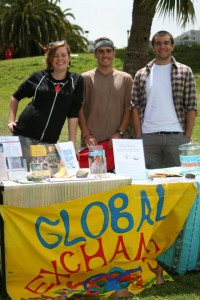 Definitely a tasty tactic to bring this very important message to Hershey’s headquarters! The pictures say it all; check them out on our Facebook page.

“Mime Troupe audiences are a great group to inform about Hershey’s use of child labor,” said Jenny White, Global Exchange volunteer. “We couldn’t handle people fast enough in the hour and a half before the show started.  A number of people signed our petition too.” 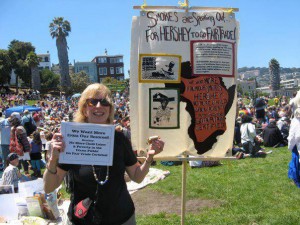 Those are the best s’mores I ever ate,” said 7 year Guillermo Krebs-Alonzo of San Francisco. “That’s because the chocolate wasn’t made by children who should be in school, not working,” added his grandmother, Gloria Alonzo. 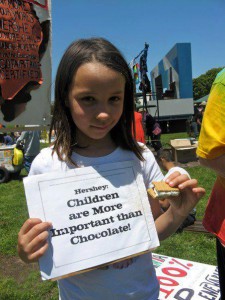 The best part, aside from enjoying tasty Fair Trade s’mores is that photos from the action will be posted on Hershey’s Facebook page, (which is currently promoting s’mores made with Hershey’s chocolate), flooding the fan page with messages demanding that Hershey once and for all go Fair Trade in its cocoa harvesting and production.

Want to make your voice heard and your sweet tooth sing?  You still have time to catch us at 2 more Mime Troupe Performances, this Sunday, July 15th at Cedar Wood Park in Berkeley; and Sunday, August 5th, at Live Oak Park in Berkeley. 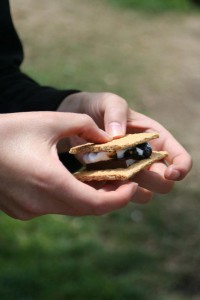 GET YOUR S’MORES ON!

You can help share this important Fair Trade message with Hershey and contribute to Global Exchange’s goal of making at least 1,000 Fair Trade S’mores between the Fourth of July and Labor Day weekend.