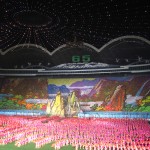 This September, on the day of the 64th Anniversary of the foundation of the Democratic People’s Republic of Korea (DPRK), a group of international travelers will be among those to attend what may be one of the last performances of the Arirang Mass Games during a whirlwind trip to North Korea.

You could be among them. There are some spots still open for Global Exchange’s Beyond the Bamboo Curtain Reality Tour to North Korea this September 7th-15th. 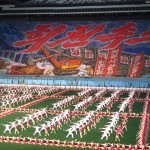 Started in 2002, the Airang games, named after the most well known Korean song and emblem of nationalism during the Japanese colonial rule from 1910 to 1945, takes place at the May Day Stadium in Pyongyang. The event features about 100,000 performing artists, divided into five acts each developing a part of the DPRK history, focusing on unification and national unity and featuring political developments and themes.

The Airang games is just one of the highlights of the Beyond the Bamboo Curtain Reality Tour.

During our stay in the DPRK travelers will also have the opportunity to gain first-hand perspective on the effects of both U.S. and North Korean policies.

We will experience a slice of daily life at schools, hospitals, a bowling alley and farming cooperative, local restaurants and more. Other stops will include a visit to the Sinchon War Museum (Museum and Site of U.S. Korean War Atrocities in Sinchon) and the demilitarized zone (DMZ).

Is it Time for You to Visit North Korea?

If you would like to see what’s behind the bamboo curtain, now is your chance. Visit our website for all the details about this upcoming trip and perhaps you’ll join us for this adventure of a lifetime!