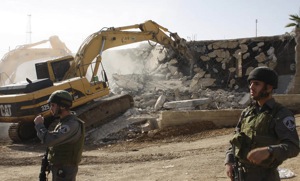 The invested shares were valued at over $72 million, making this the largest divestment action of this kind in the U.S. so far.

Caterpillar produces and sells bulldozers and civil engineering tools to the Israeli army under the U.S. military aid to Israel. These tools have been regularly used by Israel in internationally condemned violations of human rights and international laws, such as the systematic demolition of Palestinian homes and land resources and the attacks on civilians in Gaza and in South Lebanon.

This divestment came out of the removal of Caterpillar from the Morgan Stanley Capital International (MSCI) World Socially Responsible Index, a list used by many Socially Responsible Investment (or ESG) funds in screening their investment portfolios. In its announcement MSCI lists the use of Caterpillar bulldozers in the Israeli occupation as one of the “main factors” in the delisting of the company. This is a monumental moment for advocates of human rights in Palestine, as all responsible investors are expected to follow TIAA-CREF and divest from Caterpillar. Moreover, this action shows how human rights violations in the West Bank have been overlooked by the ESG investment community up until now, and it is time for it to screen their portfolios for other corporations involved in crimes in the Israeli occupation.

Though we must take time to celebrate the victory of our hard work, there is still much to be done. While they dropped Caterpillar in their Social Choice Account, TIAA-CREF still holds investments in Caterpillar and other companies supporting the occupation. We need your help!

Join us as part of the We Divest Campaign to ask TIAA-CREF to divest all of its funds from corporations that are directly involved in severe human rights violations in the Israeli occupation, including: HP, Motorola Solutions, Veolia and Elbit.

More BDS actions this week: This week the Presbyterian Church (USA) is holding their national General Assembly in Pittsburgh where they are considering divestment from Caterpillar, Motorola Solutions and Hewlett-Packard. Support for divestment is overwhelming, including support from Palestinian Christians and Jewish Rabbis.

UPDATE (7/3/2012): The Presbyterian committee on the Middle East has voted overwhelmingly in favor of divesting from three companies whose products are used by the Israeli military. The full plenary vote is set for Thursday or Friday of this week. (via Mondoweiss)

You can support church divestment!

Thank you for standing in solidarity and taking action to bring justice in Palestine through corporate accountability.
_________________
A special thank you to Jenna Bitar for compiling the information for this post.